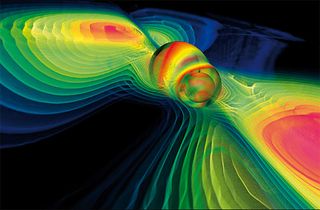 View from a computer simulation showing the production of gravitational waves during a black-hole collision.
(Image: © MPI for Gravitational Physics/W.Benger-Zib)

Paul Sutter is a visiting scholar at The Ohio State University’s Center for Cosmology and AstroParticle Physics (CCAPP). Sutter is also host of the podcasts Ask a Spaceman and RealSpace, and the YouTube series Space In Your Face. Sutter contributed this article to Space.com's Expert Voices: Op-Ed & Insights.

Have you ever wanted to reach out from far away and just … slap someone? Usually, it’s pretty difficult, but if you’re both standing in some water, it’s not so hard. You slap the water, the water makes a wave, the wave travels to your adversary and it does the slapping for you.

It doesn't have to be water, either. You can do it in air too, although it’s not very effective. [The Hunt for Gravitational Waves: Complete Coverage]

And you can do it in a perfect vacuum.

The key here is the nature of space-time. I’ve discussed before the importance of space-time — how space and time are unified in a single fabric that stretches across eternity in four dimensions. That was the magic that enabled Albert Einstein to develop his theory of special relativity. But to make special relativity more general, Einstein had to make another leap: Space-time isn’t just a stage, fixed and unmoving, a background for all particles and forces to play around on.

Space-time isn’t a wooden floor; it’s a trampoline. It bends and curves underneath you, and that bending affects the motion of stuff around you. Go ahead: Stand in the center of a trampoline, and have a few friends roll some balls around. Look at how their paths curve. Congrats — you’re a living, breathing general-relativity demo.

Just like any other dynamic stuff, like water or air, space-time allows waves to travel through it. But waves of what?

I feel the need to note that this is a huge prediction of general relativity, and would never come about in pure Newtonian gravity. In fact, I’m pretty sure Isaac Newton would have you imprisoned for even mentioning it.

You can think of a wave as a disturbance in both time and space. Float in one spot in the ocean, and you will bob up and down with each passing crest. Take a picture of the ocean from your penthouse balcony, a moment frozen in time, and you can see the wave pattern stretch to the horizon.

But if you’re doing your buoy impersonation (“David Buoy?”) in the middle of the water, you’ll notice that unless there’s a current dragging you around, you’ll actually stay more or less in one spot. Bobbing up and down, yes, but always returning to where you started. Waves don’t transfer stuff; they transfer energy.

That’s what enables the slapping. The waves breaking on a shoreline are the result of distant ferocious storms beating against the water or faraway winds brushing across the surface. You can’t see the storm, but it still gets to transfer some of its energy to you.

And gravitational waves (note here, they are not "gravity waves"; that name was taken before general relativity got going) are similar. They make you bob up and down. Well, almost. It’s more like in and out. Or stretchy-squeezy, like space-time is playing with putty. As a gravitational wave passes through you, you literally get stretched out and squashed, over and over again.

But how could a simple ripple in space-time affect you like that? What force is it using? It’s using gravity, because that’s what gravity is: the bending and warping of space-time. And if space-time is wiggling, you get to jiggling.

It’s pretty easy to make a gravitational wave. Just move around. See? I said it was easy! But to make one even barely substantial, it helps to be heavy. Like black-hole heavy. [The Search for Gravitational Waves (Gallery)]

A black hole just sitting there, minding its own business, isn’t going to make waves, just as you standing in the center of a pool won’t. But if that black hole starts moving — say, by spiraling in on a collision course with a relative — it’s going to ring space-time like a bell.

Those waves travel throughout space-time at the speed of light, eventually washing over the Earth. But even big waves from the most momentous events in the universe are exceedingly tough to find. I mean, it’s not like you or I feel continuously taller and shorter minute by minute. You might feel them, if they were strong enough — or if you were unlucky enough to get close to the merger event — but even the heavies in our universe make only the barest of space-time breezes.

It’s not like we haven’t seen evidence for gravitational waves already. The 1993 Nobel Prize in physics was awarded for the indirect detection of these waves: a pulsar orbiting a neutron star, steadily losing energy by waving the space-time underneath them, causing them to slowly fall together.

What we’re hoping for with experiments like the Laser Interferometer Gravitational-Wave Observatory (LIGO) is to directly observe gravitational waves as they slosh onto the Earth. Imagine all the fantastic events happening in the cosmos: black holes colliding, massive stars blowing up, even the faintest whispers from the universe’s earliest moments. But shrouded behind dense layers of impenetrable gas or buried deep in cosmic time, they remain unreachable, inaccessible to traditional astronomy. But the waves persist.

The ability to directly see gravitational waves would take the blinders off one of the last great windows into the universe, allowing us to study the fundamentals of gravity in some of the most extreme corners of the cosmos. What wonders will be revealed to us? What new mysteries will confront and confound us?

The sky above us is ringing from the cacophony of countless bells, each one given a unique signature from the event that created it. Those waves wash over us and through us, subtly and gently flexing the space-time under our feet and in our bodies.

Somewhere out in deep space, a black hole is trying to slap you. Gently, caressingly, but slap you nonetheless. Can you feel it?

Editor's Note: The LIGO team is holding a news conference Thursday (Feb. 11) at 10:30 a.m. EST (1530 GMT) to provide a "status report" on the search for gravitational waves. You can watch this news conference, which is widely expected to announce history's first direct detection of these space-time ripples, live here at Space.com.

Learn more by listening to the Ask A Spaceman podcast, available on iTunes and on the Web at http://www.askaspaceman.com. Ask your own question on Twitter using #AskASpaceman or by following Paul @PaulMattSutter and facebook.com/PaulMattSutter.