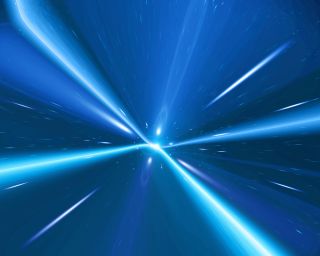 Paul Sutter is a research fellow at the Astronomical Observatory of Trieste and visiting scholar at the Ohio State University's Center for Cosmology and Astro-Particle Physics (CCAPP). Sutter is also host of the podcasts Ask a Spaceman and RealSpace, and the YouTube series Space In Your Face. He contributed this article to Space.com's Expert Voices: Op-Ed & Insights.

James Clerk Maxwell had no idea what he was doing. To be fair, he knew what he was doing when it came to making perhaps one of the greatest scientific achievements of the 19th century: showing that electricity and magnetism were really just two sides of the same electromagnetic coin. Oh yeah, and he discovered what light is. Yeah, light. You may have heard of it. His insights allowed him to realize that it's all unified under a single force: the light from the sun, the magnet stuck to your fridge, and the electricity in your smartphone.

What he may not have realized was that the theory he developed sowed the seeds of a revolution that would sweep away the old Newtonian Order and usher in a new Age of Relativity. His results would usher in an entirely new worldview: a paradigm where space and time are not separate entities, but unified as a single space-time. Whoa.

Maxwell also had a beard that would make the bartender at your local gastropub jealous. But it was the explaining-light-bit that stuck in everybody's collective craw. Maxwell identified light as a self-sustaining wave of electricity and magnetism (an "electromagnetic wave," if you will), but if it's a wave, what is it waving? Sound waves need air to wave around, and ocean waves need water to wave around, so what do electromagnetic waves … wave around?

The stuff of light

"Ah-ha," says Maxwell in my fictional argument, "The new theory itself gives a clue." The speed of this newfangled electromagnetic wave is a constant, with the exact number depending on the properties of magnetic and electric fields in a vacuum.

A vacuum? Where there's absolutely nothing else? Why, that's the domain of the aether. I get it now: Light is a wave of aether! Ta-da! Right. The aether. The stuff, the goop, the nougaty goodness that permeates the entire universe. If there's nothing somewhere, then that somewhere is full of aether. There's a reason that the word aether is unfamiliar to you post-19th century readers: Without knowing it, Maxwell's insight into the nature of light would end up destroying the entire concept.

But why did people think we needed some aether-stuff for light to wave around in the first place?

Galileo was the first to point out the obvious: all motion is relative. When I say something like "the ball is traveling at 50 mph towards me," I implicitly add "relative to my head." If I'm on a train, someone standing on the platform would add the speed of the train to the speed of the ball to get the "total" speed. Another interested observer, way out in space, would also add in the rotation and orbit of the earth. So what's the real speed? The absolute, final speed?

This idea of relative motion means that you can't easily figure out that final speed. For example, a physics experiment performed on the train (say, testing how much my head would hurt after being hit with a ball) would not tell me if I was on a train or not. (Assuming it's not accelerating. And the windows are shut. And so on. This is a thought experiment, alright?)

You've seen this yourself. Throw a ball around on an airplane. After being restrained by the flight attendants, reflect on the fact that the ball behaved perfectly normally, despite the fact that you're hurtling through the air at several hundred miles per hour.

Enter the universal reference frame. A "background" to the universe that stays fixed and unmoving for eternity, giving us all a stage to play around on. That's the place where we can measure the "total, real, final, I'm serious, guys" speed. Oh, and a master clock, too, to keep perfect time. That'd be useful.

This assumption of a fixed background formed one of the bases of Newton's laws of motion. It was in this universal frame that he could write down the mathematics that he needed to get the job done. All motion in the universe is relative to that background.

Back to Maxwell. Since the speed of light was a constant in the vacuum, and the vacuum was filled with aether (as the thinking went back then), then the aether must be in the universal reference frame. In other words, the aether itself was the universal Newtonian background. If we're moving around relative to that fixed background, we can detect our motion relative to it — and hence deduce the properties of the aether — by measuring changes to the speed of light. Another ta-da, and a huzzah to boot!

So, by golly, let's go out and do it. And that's what a bunch of people, including Albert Michelson and Edward Morley did. Or more correctly, attempted to do. By building a sensitive apparatus and comparing the speed of light moving in different directions at different times of day, they thought they could measure the motion of the Earth relative to the background aether. Key word: thought.

That's the problem: try as they might, the Michelson-Morley experiments failed to detect any changes to the speed of light . At all. Ever. Even when they asked nicely. No matter what, no matter how fast or in what direction the Earth was moving, their measured speed of light remained stubbornly fixed.

This is what's called a "problem." On one side you have the Newton worldview, saying there must be an absolute reference frame, and on the other you have Maxwell plus the M&M (wait, that may be copyrighted, let's go with M-M) worldview, saying there is no evidence of the aether, and hence no absolute reference frame. Who wins? I mean, they're all pretty smart, so it's tough.

So that's what they mean by 'relativity'

Along came Einstein to settle the dispute. And by "settle" I mean "pick Maxwell." Einstein took the old notions of Galileo's relative motion and took them to the extreme. Yes, everything is relative. And that's it. No absolute reference frames. No aether. No master clocks. Just relative motion. Things can only be said to be "moving" relative to another observer.

What's the big deal? Special Relativity is the big deal. By disregarding the absolute reference frame (and the aether along with it) the world has some weird properties. For example, there is now a universal speed limit. That's right: we've traded a universe with no speed limits but a fixed background to one with a speed limit but free of any aether.

And there's our universal speed limit: the speed of light in a vacuum. Constant for one, and thus constant for all, no matter how fast you're moving.

Switching to a universe with Special Relativity comes at a price. After all, with great power comes great relativity. Ha-ha, sorry, couldn't resist. But, really, there is a price. No longer can space and time be thought of as separate things. There is only space-time. That doesn't sound like a big deal, but now the universe is a lot stranger: without an absolute reference frame, different observers can disagree about lengths, or the duration of time, or even the ordering of events. Sounds spooky.

It is all now, as they say, relative. What does this mean for you and me? To be continued in my next essay…

Learn more by listening to the episode "What is spacetime? (Part 1)" on the Ask A Spaceman podcast, available on iTunes and on the Web at http://www.askaspaceman.com.