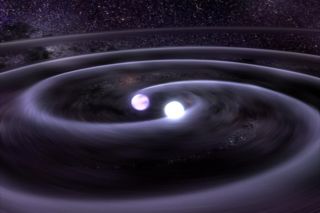 Gravitational waves from inflation generate a faint but distinctive twisting pattern in the polarization of the cosmic microwave background, known as a "curl" or B-mode pattern. For the density fluctuations that generate most of the polarization of the CMB, this part of the primordial pattern is exactly zero. Shown here is the actual B-mode pattern observed with the BICEP2 telescope, which is consistent with the pattern predicted for primordial gravitational waves. The line segments show the polarization strength and orientation at different spots on the sky. The red and blue shading shows the degree of clockwise and anti-clockwise twisting of this B-mode pattern.

The tiny temperature fluctuations of the cosmic microwave background (shown here as color) trace primordial density fluctuations in the early universe that seeded the later growth of galaxies. These fluctuations produce a pattern of polarization in the CMB that has no twisting to it. Gravitational waves from inflation are expected to produce much a fainter pattern that includes twisting ("B-mode") polarization, consistent with the pattern observed by BICEP2, which is shown here as black lines. The line segments show the polarization strength and orientation at different spots on the sky.

The sun sets behind BICEP2 (in the foreground) and the South Pole Telescope (in the background).

Cosmic superstring loops wiggle and oscillate, producing gravitational waves, then slowly shrink as they lose energy until they disappear.

The LISA mission was planned to be the first space-based mission to attempt the detection of gravitational waves. These are ripples in spacetime that are emitted by exotic objects such as black holes.

Cataclysmic events, such as this artist's rendition of a binary-star merger, are believed to create gravitational waves that cause ripples in space-time.