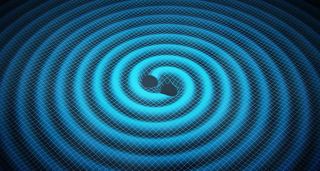 Astronomers may finally have found elusive gravitational waves, the mysterious ripples in the fabric of spacetime whose existence was first predicted by Albert Einstein in 1916, in his famous theory of general relativity.

Scientists are holding a news conference Thursday (Feb. 11) at 10:30 a.m. EST (1530 GMT) at the National Press Club in Washington, D.C., to discuss the search for gravitational waves, which zoom through space at the speed of light.

A media advisory describing the news conference is brief and somewhat vague, promising merely a "status report" on the ongoing hunt by the scientists using the Laser Interferometer Gravitational-Wave Observatory, or LIGO. But there's reason to suspect that researchers will announce a big discovery at the Thursday event. [The Search for Gravitational Waves (Gallery)]

Rumors have been swirling for several months that the LIGO group has spotted gravitational waves. Arizona State University cosmologist Lawrence Krauss (who's not a LIGO team member) first tweeted this rumor in September, and then repeated it in another tweet Jan. 11.

And Wednesday (Feb. 3), theoretical physicist Cliff Burgess, of McMaster University and the Perimeter Institute for Theoretical Physics in Ontario, fleshed the rumor out with a fair bit of purported detail. In an email he sent to the entire McMaster physics department (which eventually found its way onto Twitter), Burgess — who, like Krauss, is not part of the LIGO team — wrote that sources told him that LIGO has detected gravitational waves produced by the merger of two black holes. The discovery will be published Thursday in the prestigious journal Nature, Burgess added, as reported by Science magazine.

Einstein's equations showed that gravitational waves should be generated by the acceleration of massive objects. (The most dramatic or catastrophic events — such as supernova explosions and black-hole mergers — should produce the strongest waves.) These distortions in spacetime then radiate outward at the speed of light.

LIGO is a set of two identical, supersensitive detectors that researchers built in Livingston, Louisiana and Hanford, Washington to pick up the tiny movements of spacetime caused by gravitational waves that reach Earth.

Each LIGO detector beams laser light down arms 2.5 miles (4 kilometers) long, which are arranged in the shape of an "L." If a gravitational wave passes through the detector system, the distance traveled by the laser beam changes by a minuscule amount — thousands of times smaller than the diameter of an atomic nucleus. Still, the LIGO gear should be able to pick this difference up, mission team members have said.

If LIGO — which is operated by MIT and the California Institute of Technology, and funded by the U.S. National Science Foundation — has indeed directly detected gravitational waves for the first time, a new era has likely opened up in astronomy and cosmology.

"Since gravitational waves don't interact with matter (unlike electromagnetic radiation), they travel through the universe completely unimpeded, giving us a crystal-clear view of the gravitational-wave universe," LIGO team members wrote in a description of the project.

"They will carry information about their origins that is free of the distortion or alteration suffered by electromagnetic radiation as it travels through millions of light-years of intergalactic space," they added. "With this completely new way of examining astrophysical objects and phenomena, gravitational waves will truly open a new window on the universe, providing astronomers and other scientists with their first glimpses of previously unseen and unseeable wonders, and greatly adding to our understanding of the nature of space and time itself."