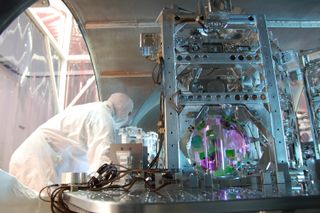 A technician works on some of the optics for a Laser Interferometer Gravitational-Wave Observatory detector.
(Image: © LIGO Laboratory)

To spot gravitational waves directly for the first time ever, scientists had to measure a distance change 1,000 times smaller than the width of a proton.

Researchers with the Laser Interferometer Gravitational-Wave Observatory (LIGO) announced today (Feb. 11) that they had made history's first direct detection of gravitational waves, enigmatic ripples in space-time whose existence was first predicted 100 years ago by Albert Einstein's famous theory of general relativity.

The gravitational waves were generated by the merger of two medium-size black holes about 1.3 billion years ago, researchers said. These waves raced through space at the speed of light and encountered Earth, where they were picked up by LIGO's two huge detectors as a brief signal on Sept. 14, 2015. [Gravitational Waves Detected by LIGO: Complete Coverage]

The LIGO detectors are in Livingston, Louisiana, and Hanford, Washington. Each one consists of a giant L-shaped structure with arms 2.5 miles (4 kilometers) long. A laser beam shines down each arm from the crux of the "L," and mirrors at the ends of these arms reflect the light back.

If the beams from both arms arrive back at the crux at the same time, they cancel each other out, and no signal is produced in the system's light detector. This is the normal, expected scenario. But if one of the beams arrives a bit late, a signal is produced, which could be evidence of a gravitational wave.

Gravitational waves, after all, distort the fabric of space-time. A wave that passes through a LIGO detector — and "passes through" is a fairly apt description, because gravitational waves do not interact meaningfully with matter — will lengthen space-time ever so slightly along one arm of the "L," and compress it along the other arm.

To put this kind of sensitivity into yet more perspective, LIGO technology is theoretically capable of measuring the distance from the sun to the nearest star — Proxima Centauri, which lies about 4.25 light-years away — "to a level of about the width of a human hair," David Reitze of the California Institute of Technology (Caltech), executive director of the LIGO Laboratory, said during a news conference today.

"LIGO is the most precise measuring device ever built," Reitze added.

Achieving this level of sensitivity isn't easy. For example, LIGO's laser beams travel down the detectors' arms in a near-perfect vacuum. And the system's light-reflecting mirrors hang from pendulums in a sophisticated quadruple-suspension setup, to isolate them from the everyday jiggling and jostling experienced on Earth's surface, LIGO team members said.

Furthermore, the groundbreaking detection wouldn't have been possible without a significant overhaul of the LIGO detectors, which first hunted for gravitational waves between 2002 and 2010. The project then took a five-year observing hiatus, as team members redesigned and upgraded the system's instruments to get a new "Advanced LIGO" up and running. [Study of Gravitational Waves Could Unravel Many Mysteries (Video)]

Advanced LIGO features a sensitivity 10 times that of the original incarnation, project representatives said. The new version began its first official observing campaign in September 2015 — a few days after the historic detection, which was actually made during an engineering test run.

The fact that Advanced LIGO made a detection so soon after getting to work suggests that the system will spot more gravitational waves in the near future, team members said.

"We ought to see some more over the coming year," said LIGO project co-founder Kip Thorne, also of Caltech.

The Sept. 14 signal was spotted by both LIGO detectors, about 7 milliseconds apart. This double detection gave team members confidence that they had captured a real astrophysical event, rather than something produced by local environmental conditions.

But they still took great pains to rule out alternative explanations, scrutinizing a variety of detector data and the output of numerous on-site instruments that measure seismic activity, radio interference and many other possible sources of "noise" that could conceivably mimic a gravitational-wave signal, team members said.

"It took a long time to get this [result] out, and that's part of the reason," said LIGO project co-founder Rainer Weiss, of the Massachusetts Institute of Technology (MIT).

Details of the signal allowed the LIGO team to estimate the masses of the two merging black holes — 29 and 36 solar masses, respectively. The single black hole that resulted from this smashup contains just 62 times the mass of the sun.

"That's because there were three solar masses emitted in energy, in gravitational waves. That's a huge amount of energy," Gonzalez said. "And we can tell all of that from this tiny fraction of a second in the waveform."

Further details embedded in the signal revealed that the wave source lies about 1.3 billion light-years from Earth, she added. And the time delay between the signals recorded in Louisiana and Washington provided more information, allowing the LIGO team to triangulate that source's location to a degree.

"We can tell it came from the southern sky, in the rough direction of the Magellanic Cloud," Gonzalez said.

The LIGO collaboration will publish its results in an upcoming issue of the journal Physical Review Letters.

The LIGO project is operated by scientists at Caltech and MIT, and it's funded by the U.S. National Science Foundation.