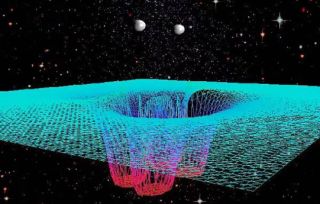 Editor's note for Oct. 3, 2017: Astrophysicists Kip Thorne and Barry Barish of Caltech, and Rainer Weiss of MIT won the Nobel Prize for Physics for the first detection of gravitational waves. Below is our coverage of that historic discovery.

WASHINGTON — Gravitational waves, the cosmic ripples that distort space-time itself, have been directly detected for the first time.

In a highly anticipated announcement today (Feb. 11), researchers affiliated with the Laser Interferometer Gravitational-Wave Observatory (LIGO) reported the detection of gravitational waves. The signal picked up by LIGO came from the collision of two black holes and was detected on Sept. 14, 2015 by LIGO's twin detectors in Livingston, Louisiana and Hanford, Washington, scientists said.

This cosmic crash sent gravitational waves streaming outward at the speed of light, causing ripples in the fabric of space-time, similar to how a dropped pebble disturbs a still pond. Researchers said the collision occurred 1.3 billion years ago between black holes that were about 29 and 36 times more massive than the sun, respectively. During the crash, about three times the mass of the sun was converted into gravitational waves in less than a second, generating a peak power output of about 50 times that of the entire visible universe, they added. [Gravitational Waves Detected by LIGO: Complete Coverage]

"Our observation of gravitational waves accomplishes an ambitious goal set out over five decades ago to directly detect this elusive phenomenon and better understand the universe, and, fittingly, Einstein's legacy on the 100th anniversary of his general theory of relativity," said LIGO Laboratory executive director David Reitze, of the California Institute of Technology in Pasadena, in a statement.

The detection is a milestone moment in astronomy and astrophysics. Unlike light waves, gravitational waves don't get distorted or altered by interactions with matter as they race through space; they therefore carry "pure" information about the objects and events that created them, according to LIGO researchers.

"With this completely new way of examining astrophysical objects and phenomena, gravitational waves will truly open a new window on the universe, providing astronomers and other scientists with their first glimpses of previously unseen and unseeable wonders, and greatly adding to our understanding of the nature of space and time itself," LIGO team members wrote in an online description of the project.

Gravitational waves were first predicted by Albert Einstein in his famous 1916 paper on general relativity. One of the central, and strangest, tenets of general relativity is that space and time are not separate things but rather are linked together in a single fabric: space-time. Massive objects, like stars, stretch and curve this fabric, sort of like how a bowling ball distorts a rubber sheet. These dips cause objects such as planets, and even light, to take a curved path around those more massive bodies.

Gravitational waves affect this fabric as well, causing ripplelike distortions. Previous studies have confirmed the existence of gravitational waves — which are generated by the acceleration (or deceleration) of massive objects — through indirect methods, but the LIGO find is the first direct detection of this enigmatic phenomenon.

"The description of this observation is beautifully described in the Einstein theory of general relativity formulated 100 years ago and comprises the first test of the theory in strong gravitation," LIGO team member Rainer Weiss, of the Massachusetts Institute of Technology (MIT), said in a statement. "It would have been wonderful to watch Einstein's face had we been able to tell him."

LIGO can only spot relatively strong gravitational waves, which are created by dramatic events, such as two black holes swirling around each other and then colliding, or a merger of superdense stellar corpses called neutron stars. The detector can also find gravitational waves generated by an exploding star, known as a supernova, LIGO team members have said.

Spotting these space-time ripples is a serious challenge. As a gravitational wave passes through Earth, it squishes space in one direction and stretches it another direction. LIGO looks for that warping of space-time using two "L"-shaped detectors; one is in Livingston, Louisiana, and the other is in Hanford, Washington.

Each arm of each detector is 2.48 miles (4 kilometers) long. Near the point where the two arms meet, a pulse of laser light is released down each arm simultaneously. The pulses travel down an arm, bounce off a mirror at the far end and come back near the starting point, at the crux of the "L."

If a gravitational wave passes by, it will compress one arm of the detector and stretch the other. As a result, the light beam traveling down the stretched arm will take slightly longer to get back to the starting point than will the light beam traveling the arm that has been compressed. (If the same signal is spotted by both detectors, researchers can be confident the signal is real, and not the result of environmental conditions at one of the two sites. Recording the signal at two different locations also allows scientists to find the gravitational wave's source in the sky by triangulation.)

That logic seems simple enough, but the change in the length of each arm is far smaller than the width of an atomic nucleus. If the LIGO detector spanned all the way from the sun to the next-nearest star — Proxima Centauri, located 24.94 trillion miles (40.14 trillion km) away — a gravitational wave would shrink the detector by only the width of a human hair, one LIGO scientist said.

This is not the first time gravitational waves have been in the news. In 2014, researchers using the BICEP2 telescope in Antarctica announced they had detected signatures of gravitational waves in the microwave light left over from the Big Bang (known as the cosmic microwave background). But that result fell apart when observations by Europe's Planck space observatory showed the alleged signatures were probably nothing but space dust.

The LIGO team's claim of direct gravitational-wave detection will very likely undergo intense scrutiny before the scientific community fully accepts the result as sound. There are no other experiments that measure the same kind of gravitational waves that LIGO is sensitive to, so there is currently no way to directly compare the results with another experiment.

The research will be published in an upcoming issue of the Physical Review Letters.

LIGO is operated by scientists at the California Institute of Technology and the MIT, and it's funded by the U.S. National Science Foundation. The LIGO Scientific Collaboration has more than 1,000 members, from 83 institutions in 15 countries.