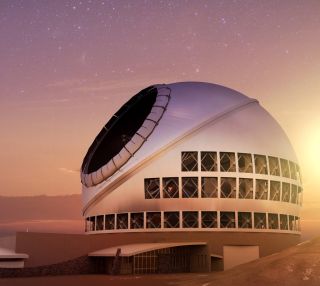 Hundreds of protesters, including Native Hawaiian community members, their elders (kupuna) and others have been gathering on the road leading to the summit of Mauna Kea on Hawaii's Big Island to challenge the addition of another telescopic facility to the mountain that is sacred to many on the island.

The group has been situated at the base of the mountain since Monday (July 15), when construction gear was first scheduled to begin arriving for the $1.4 billion Thirty Meter Telescope (TMT) project, according to the Associated Press. There were about 500 people gathered at Mauna Kea on Monday, according to the Honolulu Star-Advertiser.

Unarmed National Guard units have been on the scene since Monday; arrests began yesterday morning (July 17) and continued in front of a crowd that had grown to 2,000 people, according to the AP. The AP added that astronomers took active telescopes on the mountain offline on Tuesday (July 16) because of inconsistent staff access to the site.

Related: Will the Thirty Meter Telescope Be Moved to the Canary Islands?

Mauna Kea, which remains a place of prayer to this day, is an inactive volcano that rises 13,796 feet (4,205 meters) above sea level. Its base lies under the Pacific Ocean, and if measured from bottom to top, Mauna Kea outshines Mount Everest as the tallest mountain on the planet.

The summit is the site of 13 independent observatories, five of which may be decommissioned by the time TMT would be up and running. The current Keck Observatory telescopes on Mauna Kea are some of the largest in the world, and if completed, TMT would be, too: it is named after its 98-foot-diameter (30 meters) primary mirror.

The debate about TMT began when project officials selected Mauna Kea as its site in 2009. Telescope officials say TMT is valuable to science because the next-generation facility has the capacity to peer deeper into space and farther back in time than existing instrumentation, taking imagery several times sharper than what the Hubble Space Telescope can see.

Some in Hawaii also see this facility as an opportunity for job creation, and on Tuesday (July 16) a group waved signs along Kanoelehua Avenue in the town of Hilo to show support for TMT, according to a video posted to Twitter by Hawaii News Now reporter Mileka Lincoln.

But protesters argue that the international and state funding that goes toward TMT's construction and the maintenance of existing facilities on the mountain doesn't factor in local indigenous community considerations. Members of the dozen observatories on Mauna Kea have described their approach to cultural and environmental conservation of the site as "stewardship" — language some people criticize as inappropriate.

Iokepa Casumbal-Salazar (no relation to this reporter), an indigenous studies professor at Ithaca College, said during an April webinar hosted by the Union of Concerned Scientists that this language reveals a disconnect to the struggle that Native Hawaiians have historically faced regarding land rights and puts those without religious and cultural ties to the mountain in charge of its fate.

"If we don't take into account the ways in which scientists who practice their work on Mauna Kea today are inheritors of the privileges that were established for them through U.S. militarism … it will be impossible to understand why Hawaiians stand against the astronomy expansion," he said.

Casumbal-Salazar, who is part Native Hawaiian, also resisted the way some proponents of the telescope have portrayed the protesters as anti-science. "We are a science-based people, bottom line," he said, adding that the conversation requires an approach with a stronger basis in the social sciences.

On Thursday, about 25 telescope workers left the facilities at the summit, according to the Star-Advertiser; a spokesperson said they had no problem with the protesters, but were leaving because they couldn't get up the mountain easily.