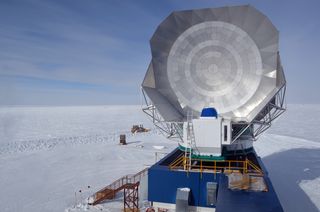 The South Pole Telescope is one of the facilities that came together around the world to create the virtual Event Horizon Telescope that targeted two black holes.
(Image: © Peter Rejcek, National Science Foundation)

The Event Horizon Telescope Collaboration is a multinational research project that images black holes. The collaboration released the first-ever high-resolution image of a black hole — the one at the heart of the galaxy Messier 87 — on April 10, 2019.

The image is significant as it is the first of its kind, but also because the size and shape of the black hole's "shadow" is consistent with predictions from Einstein's theory of general relativity.

"We had indirect evidence of [black holes]," said Feryal Özel, an astrophysicist at the University of Arizona. "So far what we can say is, 'Yes, it's what the theory predicts.'" Özel leads the project's modeling and analysis group, and is part of its science council.

The collaboration draws on a wide range of expertise and includes over 200 scientists and engineers working with telescopes around the world. The Event Horizon Telescope organization includes working groups dedicated to instrumentation; data collection and processing; data analysis; "near horizon science utilization"; "beyond horizon science utilization"; and products and publications. And within each of these broad categories are even further specialized groups.

A test of general relativity

Albert Einstein predicted the existence and behavior of black holes over a century ago as part of his theory of general relativity. Black holes are extreme concentrations of mass with a gravitational effect that engulfs matter and even traps light. The "event horizon" of the Event Horizon Telescope name refers to the imagined boundary from which no light or other radiation can escape the pull of the black hole. In addition to the event horizon, which focuses on light, general relativity predicts a point of no return for matter around black hole.

In a sense, it is not possible for the Event Horizon Telescope to take pictures of black holes, but it can collect information about everything that emits radiation around black holes. Therefore, black hole images will be silhouettes that do not directly show the black hole, but rather its effects on light and matter around it.

Scientists working with the Event Horizon Telescope were looking to see how closely the image of the Messier 87 black hole would correspond to predictions. "The size and shape of the shadow — the 'black hole' — is what we expected from general relativity," Özel told Space.com. That is, it was roughly circular, and the expected size for an object of that mass.

Further observations will test those predictions, although Özel suspects that the basic appearance of the black hole shadow should remain predictable, even from different angles or at different times.

The resolution of a radio image is limited by the size of the telescope that receives the signal. For that reason, scientists have built antennas in groups, or arrays, to increase their functional size. Information from multiple telescopes in an array can be combined as though it came from a single larger dish.

Although black holes are extremely massive, they are also compact and very far away from Earth. For example, the Messier 87 black hole is around 55 million light-years away — so far away that multiple telescope sites spread across the world are necessary to capture a high-resolution picture. Each telescope can see a small part of the black hole. Together, they form a virtual telescope the size of the world.

In 2017, when data for the initial Messier 87 image was collected, the Event Horizon Telescope included telescope or telescope arrays from eight sites around the world, including Hawaii and the South Pole. Since then, three more telescopes have joined the collaboration, increasing the data the project can collect.

"We would like to continue to add more telescopes to the array so the fidelity of what we're doing keeps improving," Özel said.

Each telescope site records electromagnetic radiation that is time-coded with atomic clocks. These observations are then combined using very-long-baseline interferometry, or VLBI, which is a technique for synchronizing and integrating multiple sources of radio data. The complex calculations account for critical details such as the movement and rotation of the Earth.

The data are stitched together into a picture that Özel compared to processing night vision photography. If a black hole has too much matter circling about it, then it can also obscure the view, but some of that difficulty can be avoided, by carefully selecting the wavelength of radiation that telescopes collect, Özel explained.

"It is a clever solution, but it requires a lot of technology, human power, and logistics," she said.

The ongoing project will continue collecting data from radio telescopes, producing images, and comparing them with models. The Event Horizon Telescope has also targeted the black hole at the center of the Milky Way Galaxy, Sagittarius A* (pronounced "Sagittarius A-Star").

Sagittarius A* is around 4 million times as massive as our sun. The Messier 87 black hole is much larger, at about 6.5 billion solar masses, but its distance is tremendous, and means that the radiation took 55 million years to reach the project's telescopes. Özel stressed that the scope of the project continues to require varied expertise and many collaborators to develop the technology, collect the data and analyze it.