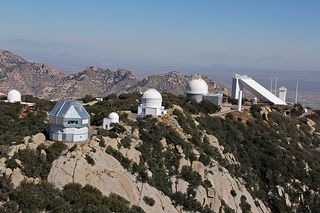 Kitt Peak National Observatory (KPNO) is home to more than two dozen telescopes for professional research, as well as a visitor center for the public. The observatory sits at an altitude of almost 7,000 feet (2,133 meters) on a mountaintop about 56 miles (90 kilometers) southwest of Tucson, Arizona. Located in the Quinlan Mountains of the Sonoran Desert, the site appeals to astronomers because of its clear weather, steady atmosphere and low humidity.

The mountain was named Kitt Peak in 1893 by Pima County Surveyor George Roskruge in honor of his sister, Philippa Roskruge Kitt, according to the U.S. Board on Geographic Names. The peak sits in the Schuk Toak District of the Tohono O'odham Nation.

Some of Kitt Peak's more notable achievements include gaining insights into the structure of the universe, measuring cosmic distances by studying supernovas and probing the universe's early history by examining "high-redshift" galaxies that are far away from Earth.

The Kitt Peak Visitor Center, according to the facility's website, offers free exhibits and daytime access to the observatory grounds. Guided tours are available for a fee, while you can purchase nighttime programs such as telescope observing and photography workshops. These costs range from about $50 up to hundreds of dollars for premium packages that include meals, lodging and personalized instruction.

One of the largest of Kitt Peak's many telescopes is the Mayall Telescope, whose main mirror is 158 inches (4 m) across. The Mayall has been operating since 1973 and is housed in a 14-story cylindrical building that dominates the Kitt Peak skyline. The other two largest telescopes at the observatory are the WIYN telescope, with a 138-inch (3.5-m) main mirror, which saw first light in 1994, and the 2.1-m reflector telescope dating from 1964.

A giant triangular structure stands out among the observatory's many domes. This is the McMath-Pierce Solar Telescope, which was the world's largest solar telescope when it began operation in 1962. By 2018 the observatory had begun converting the telescope enclosure into the Windows on the Universe Center for Astronomy Outreach, featuring interactive exhibits and visualization systems designed for visitors and students. The conversion is expected to take about two years, according to a press release from the National Science Foundation (NSF), which provided $4.1 million to support the project.

In 2019, KPNO was made part of the new NSF National Optical-Infrared Astronomy Research Laboratory (OIR Lab), which includes all the nighttime astronomy observatories supported by NSF. Before that, Kitt Peak was administered as part of the National Optical Astronomy Observatory (NOAO), which also includes the Cerro Tololo Inter-American Observatory in Chile. In the new setup, the NOAO name is retired, according to a press release from the organization that operates the observatories, the Association of Universities for Research in Astronomy.

Previously, large observatories (such as Yerkes) tended to be funded by private donors and were operated by astronomers from the observatory's host institution. An astronomer at a college without an observatory might be shut out of observing opportunities. In addition, many of the United States' older observatories were hampered by poor sky conditions caused by city lights, smoke and unfavorable observing weather. However, astronomers thought, a shared, publicly supported national observatory could be available to qualified astronomers from any university. And it could be built from scratch in a location with clear, dark skies.

A committee of astronomers selected Kitt Peak from a list of 150 candidate sites in the Southwestern U.S. In 1958, after members of the Tohono O'odham Tribal Council had the opportunity to view the moon and planets through a large telescope at the University of Arizona, they agreed to lease the mountain to astronomers as long as scientific research facilities were maintained at the site, according to an NOAO FAQ web page. The observatory occupies 200 acres (80 hectares) of the nearly 3-million-acre (1.2 million hectares) Tohono O'odham Nation.

Astronomers have made many notable discoveries at the observatory in the past 60 years, including:

Starting in 2019, the search for exoplanets is slated to make use of Kitt Peak's WIYN telescope in a program called NASA-NSF Exoplanet Observational Research (NN-EXPLORE). A new instrument, called NEID (from the Tohono O'odham word meaning "to see") will be attached to the telescope to make high-precision measurements of the back-and-forth wobble of stars in response to planets orbiting around them. (NEID is also an acronym for NN-EXPLORE Exoplanet Investigations with Doppler Spectroscopy.)

This article was updated on Nov. 19, 2019 by Space.com contributor Steve Fentress.