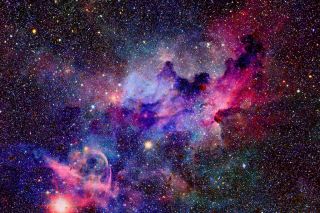 The four fundamental forces of nature are at the root of every interaction in the universe.
(Image: © NASA/Shutterstock)

These are called the four fundamental forces of nature, and they govern everything that happens in the universe.

Gravity is the attraction between two objects that have mass or energy, whether this is seen in dropping a rock from a bridge, a planet orbiting a star or the moon causing ocean tides. Gravity is probably the most intuitive and familiar of the fundamental forces, but it's also been one of the most challenging to explain.

Isaac Newton was the first to propose the idea of gravity, supposedly inspired by an apple falling from a tree. He described gravity as a literal attraction between two objects. Centuries later, Albert Einstein suggested, through his theory of general relativity, that gravity is not an attraction or a force. Instead, it's a consequence of objects bending space-time. A large object works on space-time a bit like how a large ball placed in the middle of a sheet affects that material, deforming it and causing other, smaller objects on the sheet to fall toward the middle.

Though gravity holds planets, stars, solar systems and even galaxies together, it turns out to be the weakest of the fundamental forces, especially at the molecular and atomic scales. Think of it this way: How hard is it to lift a ball off the ground? Or to lift your foot? Or to jump? All of those actions are counteracting the gravity of the entire Earth. And at the molecular and atomic levels, gravity has almost no effect relative to the other fundamental forces.

The weak force, also called the weak nuclear interaction, is responsible for particle decay. This is the literal change of one type of subatomic particle into another. So, for example, a neutrino that strays close to a neutron can turn the neutron into a proton while the neutrino becomes an electron.

Physicists describe this interaction through the exchange of force-carrying particles called bosons. Specific kinds of bosons are responsible for the weak force, electromagnetic force and strong force. In the weak force, the bosons are charged particles called W and Z bosons. When subatomic particles such as protons, neutrons and electrons come within 10^-18 meters, or 0.1% of the diameter of a proton, of one another, they can exchange these bosons. As a result, the subatomic particles decay into new particles, according to Georgia State University's HyperPhysics website.

The weak force is critical for the nuclear fusion reactions that power the sun and produce the energy needed for most life forms here on Earth. It's also why archaeologists can use carbon-14 to date ancient bone, wood and other formerly living artifacts. Carbon-14 has six protons and eight neutrons; one of those neutrons decays into a proton to make nitrogen-14, which has seven protons and seven neutrons. This decay happens at a predictable rate, allowing scientists to determine how old such artifacts are.

The electromagnetic force, also called the Lorentz force, acts between charged particles, like negatively charged electrons and positively charged protons. Opposite charges attract one another, while like charges repel. The greater the charge, the greater the force. And much like gravity, this force can be felt from an infinite distance (albeit the force would be very, very small at that distance).

As its name indicates, the electromagnetic force consists of two parts: the electric force and the magnetic force. At first, physicists described these forces as separate from one another, but researchers later realized that the two are components of the same force.

The electric component acts between charged particles whether they're moving or stationary, creating a field by which the charges can influence each other. But once set into motion, those charged particles begin to display the second component, the magnetic force. The particles create a magnetic field around them as they move. So when electrons zoom through a wire to charge your computer or phone or turn on your TV, for example, the wire becomes magnetic.

Electromagnetic forces are transferred between charged particles through the exchange of massless, force-carrying bosons called photons, which are also the particle components of light.  The force-carrying photons that swap between charged particles, however, are a different manifestation of photons. They are virtual and undetectable, even though they are technically the same particles as the real and detectable version, according to the University of Tennessee, Knoxville.

The electromagnetic force is responsible for some of the most commonly experienced phenomena: friction, elasticity, the normal force and the force holding solids together in a given shape. It's even responsible for the drag that birds, planes and even Superman experience while flying. These actions can occur because of charged (or neutralized) particles interacting with one another. The normal force that keeps a book on top of a table (instead of gravity pulling the book through to the ground), for example, is a consequence of electrons in the table's atoms repelling electrons in the book's atoms.

The strong nuclear force, also called the strong nuclear interaction, is the strongest of the four fundamental forces of nature. It's 6 thousand trillion trillion trillion (that’s 39 zeroes after 6!) times stronger than the force of gravity, according to the HyperPhysics website. And that's because it binds the fundamental particles of matter together to form larger particles. It holds together the quarks that make up protons and neutrons, and part of the strong force also keeps the protons and neutrons of an atom's nucleus together.

Much like the weak force, the strong force operates only when subatomic particles are extremely close to one another. They have to be somewhere within 10^-15 meters from each other, or roughly within the diameter of a proton, according to the HyperPhysics website.

The outstanding question of the four fundamental forces is whether they're actually manifestations of just a single great force of the universe. If so, each of them should be able to merge with the others, and there's already evidence that they can.

Physicists Sheldon Glashow and Steven Weinberg from Harvard University with Abdus Salam from Imperial College London won the Nobel Prize in Physics in 1979 for unifying the electromagnetic force with the weak force to form the concept of the electroweak force. Physicists working to find a so-called grand unified theory aim to unite the electroweak force with the strong force to define an electronuclear force, which models have predicted but researchers have not yet observed. The final piece of the puzzle would then require unifying gravity with the electronuclear force to develop the so-called theory of everything, a theoretical framework that could explain the entire universe.

Physicists, however, have found it pretty difficult to merge the microscopic world with the macroscopic one. At large and especially astronomical scales, gravity dominates and is best described by Einstein's theory of general relativity. But at molecular, atomic or subatomic scales, quantum mechanics best describes the natural world. And so far, no one has come up with a good way to merge those two worlds.

Physicists studying quantum gravity aim to describe the force in terms of the quantum world, which could help with the merge. Fundamental to that approach would be the discovery of gravitons, the theoretical force-carrying boson of the gravitational force. Gravity is the only fundamental force that physicists can currently describe without using force-carrying particles. But because descriptions of all the other fundamental forces require force-carrying particles, scientists expect gravitons must exist at the subatomic level — researchers just haven't found these particles yet.

Further complicating the story is the invisible realm of dark matter and dark energy, which make up roughly 95% of the universe. It's unclear whether dark matter and energy consist of a single particle or a whole set of particles that have their own forces and messenger bosons.

The primary messenger particle of current interest is the theoretical dark photon, which would mediate interactions between the visible and invisible universe. If dark photons exist, they'd be the key to detecting the invisible world of dark matter and could lead to the discovery of a fifth fundamental force. So far, though, there's no evidence that dark photons exist, and some research has offered strong evidence that these particles don't exist.