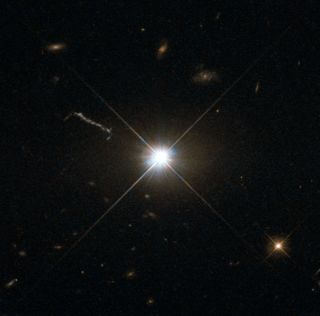 The Hubble Space Telescope captured this image of ancient and brilliant quasar 3C 273, which resides in a giant elliptical galaxy in the constellation of Virgo. Its light has taken some 2.5 billion years to reach us. Despite this great distance, it is still one of the closest quasars to our home. It was the first quasar ever to be identified, and was discovered in the early 1960s by astronomer Allan Sandage.
(Image: © ESA/Hubble & NASA)

Shining so brightly that they eclipse the ancient galaxies that contain them, quasars are distant objects powered by black holes a billion times as massive as our sun. These powerful dynamos have fascinated astronomers since their discovery half a century ago.

In the 1930s, Karl Jansky, a physicist with Bell Telephone Laboratories, discovered that the static interference on transatlantic phone lines was coming from the Milky Way. By the 1950s, astronomers were using radio telescopes to probe the heavens, and pairing their signals with visible examinations of the heavens.

However, some of the smaller point-source objects didn't have a match. Astronomers called them "quasi-stellar radio sources," or "quasars," because the signals came from one place, like a star. However, the name is a misnomer; according to the National Astronomical Observatory of Japan, only about 10 percent of quasars emit strong radio waves.

Naming them didn't help determine what these objects were. It took years of study to realize that these distant specks, which seemed to indicate stars, are created by particles accelerated at velocities approaching the speed of light.

"Quasars are among the brightest and most distant known celestial objects and are crucial to understanding the early universe," astronomer Bram Venemans of the Max Planck Institute for Astronomy in Germany said in a statement.

Scientists now suspect that the tiny, point-like glimmers are actually signals from galactic nuclei outshining their host galaxies. Quasars live only in galaxies with supermassive black holes — black holes that contain billions of times the mass of the sun. Although light cannot escape from the black hole itself, some signals can break free around its edges. While some dust and gas fall into the black hole, other particles are accelerated away from it at near the speed of light. The particles stream away from the black hole in jets above and below it, transported by one of the most powerful particle accelerators in the universe.

"Quasars are thought to form in regions of the universe where the large-scale density of matter is much higher than average," astronomer Fabian Walter, of Max Planck Institute for Astronomy, said in a statement.

Most quasars have been found billions of light-years away. Because it takes light time to travel, studying objects in space functions much like a time machine; we see the object as it was when light left it, billions of years ago. Thus, the farther away scientists look, the farther back in time they can see. Most of the more than 2,000 known quasars existed in the early life of the galaxy. Galaxies like the Milky Way may once have hosted a quasar that has long been silent.

In December 2017, the most distant quasar was found sitting more than 13 billion light-years from Earth. Scientists observed the quasar, known as J1342+0928, as it appeared only 690 million years after the Big Bang. Quasars this young can reveal information about how galaxies evolved over time.

Quasars emit energies of millions, billions, or even trillions of electron volts. This energy exceeds the total of the light of all the stars within a galaxy. The brightest objects in the universe, they shine anywhere from 10 to 100,000 times brighter than the Milky Way.

"Quasars are capable of emitting hundreds or even thousands of times the entire energy output of our galaxy, making them some of the most luminous and energetic objects in the entire universe," according to NASA. For instance, if the ancient quasar 3C 273, one of the brightest objects in the sky, was located 30 light-years from Earth, it would appear as bright as the sun in the sky. (However, quasar 3C 273, the first quasar to be identified, is 2.5 billion light-years from Earth, according to NASA. It is one of the closest quasars.)

Studying quasars has long been a challenge, because of their relationship to the hard-to-measure mass of their supermassive black holes. A new method has begun to weigh the largest of black holes in bulk.

"This is a big step forward for quasar science," says Aaron Barth, a professor of astronomy at the University of California, Irvine said in a statement. "They have shown for the first time that these difficult measurements can be done in mass-production mode."

Quasars are part of a class of objects known as active galactic nuclei (AGN). Other classes include Seyfert galaxies and blazars. All three require supermassive black holesto power them.

Seyfert galaxies are the lowest energy AGN, putting out only about 100 kiloelectronvolts (KeV). Blazars, like their quasar cousins, put out significantly more energy.

Many scientists think that the three types of AGNs are the same objects, but with different perspectives. While the jets of quasars seem to stream at an angle generally in the direction of Earth, blazars may point their jets directly toward the planet. Although no jets are seen in Seyfert galaxies, scientists think this may be because we view them from the side, so all of the emission is pointed away from us and thus goes undetected.