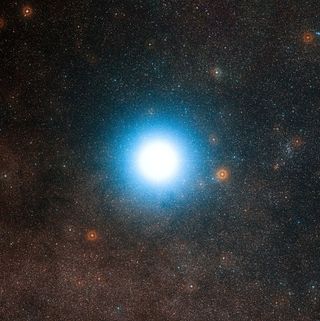 A glance at the night sky above Earth shows that some stars are much brighter than others. However, the brightness of a star depends on its composition and how far it is from the planet.

Astronomers define star brightness in terms of apparent magnitude — how bright the star appears from Earth — and absolute magnitude — how bright the star appears at a standard distance of 32.6 light-years, or 10 parsecs. (A light-year is the distance light travels in one year — about 6 trillion miles, or 10 trillion kilometers.) Astronomers also measure luminosity — the amount of energy (light) that a star emits from its surface.

Measuring star brightness is an ancient idea, but today astronomers use more precise tools to obtain the calculation.

From Greek to modern times

More than 2,000 years ago, the Greek astronomer Hipparchus was the first to make a catalog of stars according to their brightness, according to Dave Rothstein, who participated in Cornell University's "Ask An Astronomer" website in 2003.

Human eyes, however, are not very discerning. Large differences in brightness actually appear much smaller using this scale, Rothstein said. Light-sensitive charged-coupled devices (CCDs) inside digital cameras measure the amount of light coming from stars, and can provide a more precise definition of brightness.

Using this scale, astronomers now define five magnitudes' difference as having a brightness ratio of 100. Vega was used as the reference star for the scale. Initially it had a magnitude of 0, but more precise instrumentation changed that to 0.3.

When taking Earth as a reference point, however, the scale of magnitude fails to account for the true differences in brightness between stars. The apparent brightness, or apparent magnitude, depends on the location of the observer. Different observers will come up with a different measurement, depending on their locations and distance from the star. Stars that are closer to Earth, but fainter, could appear brighter than far more luminous ones that are far away.

"It is the 'true' brightness — with the distance dependence factored out — that is of most interest to us as astronomers," stated an online course on astronomy from the University of Tennessee.

"Therefore, it is useful to establish a convention whereby we can compare two stars on the same footing, without variations in brightness due to differing distances complicating the issue."

The solution was to implement an absolute magnitude scale to provide a reference between stars. To do so, astronomers calculate the brightness of stars as they would appear if it were 32.6 light-years, or 10 parsecs from Earth.

Another measure of brightness is luminosity, which is the power of a star — the amount of energy (light) that a star emits from its surface. It is usually expressed in watts and measured in terms of the luminosity of the sun. For example, the sun's luminosity is 400 trillion trillion watts. One of the closest stars to Earth, Alpha Centauri A, is about 1.3 times as luminous as the sun.

While the absolute magnitude scale is astronomers' best effort to compare the brightness of stars, there are a couple of main limitations that have to do with the instruments that are used to measure it.

First, astronomers must define which wavelength of light they are using to make the measurement. Stars can emit radiation in forms ranging from high-energy X-rays to low-energy infrared radiation. Depending on the type of star, they could be bright in some of these wavelengths and dimmer in others.

To address this, scientists must specify which wavelength they are using to make the absolute magnitude measurements.

Another key limitation is the sensitivity of the instrument used to make the measurement. In general, as computers have advanced and telescope mirror technology has improved over the years, measurements that are made in recent years have more weight among scientists than those that are made long ago.

Paradoxically, the brightest stars are among the least studied by astronomers, but there is at least one recent effort to catalog their luminosity. A constellation of satellites called BRITE (BRight Target Explorer) will measure the variability of brightness between stars. Participants in the six-satellite project include Austria, Canada and Poland. The first two satellites launched successfully in 2013.

While many stars have a consistent brightness, there are more than 100,000 known and cataloged variable stars. (Even our own sun is variable, varying its energy output by about 0.1 percent, or one-thousandth of its magnitude, during its 11-year solar cycle.) Variable stars are either intrinsic (meaning their luminosity changes due to features such as expansion, contraction, eruption or pulsation) or extrinsic (meaning that a star or planet passes in front of the star and blocks the light, or that the change is due to stellar rotation.)

Stars can also change in luminosity over time. The North Star or Polaris, for example, could have been as much as 4.6 times brighter in ancient times than it was today. A 2014 study noted that the star dimmed for the past few decades, but then drastically brightened again. Polaris is part of the class of Cepheid variables, which are extremely luminous stars that have short pulsation periods. The variations in the luminosity allow astronomers to calculate how far away these Cepheids are, making them useful "measuring sticks" if the stars are embedded in galaxies or nebulae.

Other types of intrinsic variable stars include cataclysmic variables (which brighten due to outbursts, such as during supernovae explosions) or eruptic variables (whose brightness varies during eruptions on the surface, or combinations with interstellar matter.) Extrinsic variables include eclipsing binary stars and rotating stars (such as pulsars, the cores of supernova whose electromagnetic radiation is only visible when the beam is directed at Earth.)