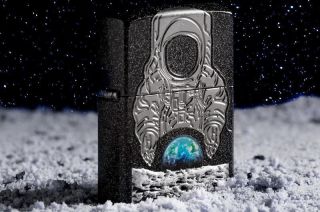 An iconic U.S. brand is sparking collector interest with a tribute to the first moon landing.

Zippo has released its "2019 Collectible of the Year," a limited edition metal lighter commemorating the 1969 Apollo 11 lunar mission.

"Zippo celebrates the 50th anniversary of the first time humans set foot on the surface of the moon, and the brave Apollo mission astronauts who proved that humanity could accomplish astronomical feats," the Zippo Manufacturing Company of Bradford, Pennsylvania, announced on its website.

Limited to 14,000 pieces, the "Moon Landing 50 Years" metal lighter features a raised front design depicting an Apollo astronaut cradling Earth as it rises above the lunar surface. The lighter's body is speckled with iridescent "sparkles" suspended inside a glossy deep black, a "Galaxy" finish that Zippo has used only twice in its history and which is employed here to "reflect brilliant flashes of light through the depths of the cosmos."

The image of the spacesuited Apollo astronaut is carved into the lighter's body and then laser engraved. The blue, green and white Earth is formed using a color imaging process "to create a stunning replica on the Earth from the view of the moon," according to the website.

Zippo's artists rendered the moon's surface with the company's newest technique, called "Texture Print," which combines color imaging with a tactile finish to add a dimensional quality to the artwork.

The "Moon Landing" lighter, which retails for $100, comes in a gift box decorated with an iridescent image of the moon.

The 2019 lighter continues a more than 50-year legacy of Zippo celebrating the first moon landing mission and the United States' achievements in space. The company has made lighters with NASA and aerospace contractor designs dating back to the start of the space age.

Zippo's first Apollo 11 commemorative lighter, featuring an illustration of two astronauts and a lunar module on the moon, was released in 1969. That same year the manufacturer also produced lighters with the portrait likenesses of Neil Armstrong, Buzz Aldrin and Michael Collins.

In more recent years, Zippo has produced replicas of its original (and now rare) Apollo 11 designs and released other anniversary editions. In 2009, Zippo offered a "Moon Landing 40th Anniversary" lighter, which also featured the Galaxy finish with artwork themed around the Apollo lunar module.

See a video highlighting Zippo’s Moon Landing Collectible of the Year at collectSPACE.