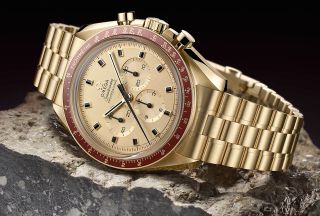 Omega is celebrating the golden anniversary of the first moon landing by going gold.

"Fifty years ago, mankind took its very first steps onto the surface of the moon. The Omega Speedmaster was there, strapped to the wrists of the astronauts, and this year, we're paying tribute to the mission's lasting legacy," Omega announced on its website.

Apollo 11 crewmates Neil Armstrong, Buzz Aldrin and Michael Collins each wore a stainless steel Speedmaster Professional chronograph on their July 1969 journey to the moon. Armstrong, though the first to walk on the moon, left his Speedmaster inside the lunar module to back up a broken timer.

It was therefore Aldrin who wore the first wristwatch out onto the lunar surface.

"The watch was a backup. If the astronauts lost the capability of talking to the ground, or the capability of their digital timers on the lunar surface, then the only thing they had to rely on was the Omega watch they had on their wrist. It needed to be there for them if they had a problem," said James Ragan, the NASA engineer who qualified the Speedmaster for spaceflight in 1965, in a statement issued by Omega.

Four months after Armstrong, Aldrin and Collins returned from the moon, Omega hosted a celebratory "Astronaut Appreciation Dinner" in Houston, where a special gold edition of the Speedmaster was presented to the Apollo spacemen. The new 50th Anniversary watch reproduces the overall look of the 1969 model with a new "Moonshine gold" dial and burgundy-color bezel ring.

"In a paler hue than the traditional 18K yellow gold, 'Moonshine' gold offers high resistance to the fading of color and luster over time," states Omega.

The 2019 timepiece differs from the 50-year-old original though, when turned over.

The 1969 gold watch (referred to by Omega as the Speedmaster BA145.022) had a solid caseback engraved with the inscription, "to mark man's conquest of space with time, through time, on time." (The 967 pieces that were sold to the public were inscribed, "The First Watch Worn On The Moon" and "Omega Speedmaster — Apollo XI 1969.")

The 2019 edition has a sapphire crystal caseback, revealing the Calbre 3861 movement, with an outer ring engraved "1969 - 2019" and an inner ring inscribed "Apollo 11 - 50th Anniversary" and "The First Watch Worn On The Moon." The inner ring also features a depiction of Earth — centered over Apollo 11's Cape Canaveral launch site — and the moon, represented by an actual sample of the celestial body in the form of a domed lunar meteorite inlay.

"The Earth and the moon on the inner ring have been produced in true proportion (3.67 : 1 in diameter)," notes Omega.

The Apollo 11 50th Anniversary Speedmaster comes packaged in a presentation box featuring a 3D printed lunar surface. Each of the boxes' grey ceramic panels are structured differently, so each box is unique.

"Furthermore, the top panel of every box is printed with the image of the Sea of Tranquillity and the landing position of Apollo 11," describes Omega.