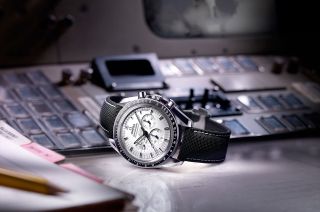 Swiss watchmaker Omega, which prior to gaining fame for timepieces used in the Olympics and the "007" films was known for making the first watch worn on the moon, has revealed its latest edition of the Speedmaster chronograph used by the astronauts. The announcement was made at Baselworld, the annual watch and jewelry trade fair held in Basel, Switzerland, on Wednesday (March 18).

The Speedmaster played an important role during the April 1970 Apollo 13 mission. After having an in-flight explosion cripple their spacecraft, Swigert used his Speedmaster to keep time as Lovell and Haise executed a critical engine burn that put them back on the course for their safe return to Earth.

For this and its other contributions to the Apollo program, Omega was awarded NASA's Silver Snoopy Award, one of the space agency's highest honors, in 1970. The award, in the form of sterling silver lapel pin, features a spacesuited Snoopy based on a drawing by creator Charles Schulz.

The cartoon dog was then, and is still now, NASA's official mascot for safety in human spaceflight endeavors.

The new Speedmaster differs from the watch that Swigert wore in several ways. In addition to an upgraded manual-winding internal motion, the chronograph's prominent color has been reversed from black to white.

"The dial of the Apollo 13 Silver Snoopy Award, inspired by the black and white comic strips printed in newspapers, is the inverse of its legendary predecessor," Omega wrote in its release.

"Fourteen small squares between zero and 14 seconds on the dial come together to form a long comic strip, with the [phrase] 'What could you do in 14 seconds?' underneath," Omega's release described. "The question is a nod to the 14-second mid-course correction."

At the center of the dial are the words, "Failure is not an option," referencing the quote delivered by actor Ed Harris, as flight director Gene Kranz, in the 1995 film "Apollo 13." [Apollo 13: What If NASA Failed? (Video)]

A rendition of a sleeping Snoopy, applied in luminescent paint, is also featured on the face, positioned in the small seconds sub-dial at 9 o'clock. Snoopy appears as if he is dreaming the now iconic phrase, which is often associated with the historic mission.

Snoopy is also depicted on the Speedmaster's caseback in the form of a sapphire crystal-covered silver medallion resembling NASA's Silver Snoopy Award pin. The Snoopy is mounted on a plate surrounded by dark blue enamel.

"Silver powder is sprinkled by hand over the enamel of the caseback, giving the impression that Snoopy is floating in space," Omega stated.

The back is inscribed along its perimeter "Silver Snoopy Award, Eyes on the Stars, 45th Anniversary" and "Apollo XIII." Each watch is also individually numbered as part of a limited edition of only 1,970 pieces.

The new Speedmaster Apollo 13 Silver Snoopy Award is the second special edition watch that Omega has released to celebrate the "successful failure" mission. It is also the watchmaker's second timepiece to feature Snoopy.

In 1995, Omega revealed a Speedmaster commemorating the 25th anniversary of the ill-fated moon flight. The watch featured the Apollo 13 patch on its dial and was limited to 999 pieces.

Eight years later in 2003, Omega celebrated its own Silver Snoopy with its first Snoopy Award edition Speedmaster. The watch, limited to 5,441 pieces (for the duration of the Apollo 13 flight – 142 hours, 54 minutes, and 41 seconds), featured the "Eyes on the Stars" design on both its face and caseback, the latter rendered in full color enamel.

The new Speedmaster Apollo 13 Silver Snoopy Award is one of four Speedmasters Omega revealed at Baselworld this year. The watchmaker also introduced stylized "White Side" and "Dark Side of the Moon" timepieces, as well as an upgraded version of its original 1957 Speedmaster.

The Omega Speedmaster Apollo 13 Silver Snoopy Award will be available in September. The price has not yet been announced.

Click through to collectSPACE to watch a video of the new Omega Speedmaster in action.