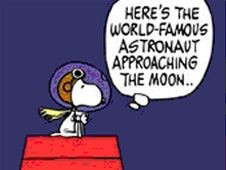 Detail from a space-related Peanuts strip from March 13, 1969. Courtesy of United Media via NASA.

Snoopy, the irreverent dog from the "Peanuts"comic strip, took time from his World War I dogfights as world-famous flyingace to become a world-famous astronaut for NASA's Apollo 10 mission.

The beagle now has a 5-foot-tall statue at Florida'sKennedy Space Center to commemoratethe flight, which launched 40 years ago this month and arrived at the moonon May 21, 1969. That's when the Snoopy lunar module and the CharlieBrown command module entered lunar orbit. Apollo 10 paved the way forApollo 11 to land menon the moon.

"It went down in his life as one of the all-timehighlights of his career," said Craig Schulz, son of Charles Schulz, thefamed American comic strip writer who died in 2000.

The elder Schulz was reportedly thrilled when NASAcontacted him prior to the 1969 mission, and approved the request despite"what-if" remarks from friends who worried about a possible missiondisaster.

"His comment was that if the astronauts could risktheir lives, he could risk his characters," the younger Schulz told SPACE.com.

The Snoopy lunar module did not land on the moon. It wastaken on the mission as a near-complete dress rehearsal for the Apollo 11 moonlanding that would take place a few weeks later.

Snoopy's first foray with NASA dates back to the Apollo 1 firewhich killedthree astronauts in 1967. That event — which Snoopy was not involved in — eventuallyled NASA to approach Charles Schulz and ask for permission to use his characteras the basis for a new safety award.

"NASA decided that they needed to come up with asafety program and wanted a mascot similar to Smokey the Bear," CraigSchulz said.

Charles Schulz then drew up a template for what hasbecome the Silver Snoopy award pin. Each pin is flown in space on shuttlemissions and presented by an astronaut to awardees who contribute to thesuccess and safety of spaceflight operations.

Less than 1 percent of the NASA-related workforce have received thehonor, which represents one of the highest and prestigious awards within thespace agency and the broader industry.

Craig Schulz and the rest of the Schulz family recentlydonated the Snoopy statue to NASA to commemorate the Apollo anniversary. The SchulzMuseum in Santa Rosa, Calif., also has an exhibit detailing the Apollo 10mission and Snoopy's space agency involvement on display through July.

As for the Snoopy lunar module, it's still flyingin space — the only Apollo module to ever get launched into a sun orbit.