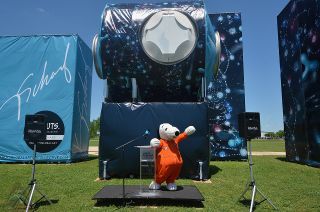 HOUSTON — Fifty years after "Charlie Brown" and "Snoopy" circled the moon, the Peanuts characters are now dotting the sky at NASA.

Artist Kenny Scharf's "Peanuts Constellation" mural, featuring Charlie Brown, Snoopy, Lucy van Pelt and Woodstock as constellations in the night sky, was used to wrap a retired training mockup of an International Space Station node. The module, along with several similarly art-wrapped towers now stand along the road between the entrances to the Johnson Space Center and Space Center Houston.

"Everyone knows NASA is here I presume, but this brings it front and center," said Jeannie Schulz, the widow of Peanuts' creator Charles "Sparky" Schulz, in an interview with collectSPACE.com. "Sparky always said that he was very proud to have worked with NASA and to have had them [choose] his characters."

Apollo 10 was the fourth crewed mission of the Apollo program and the second to orbit the moon. Launched on May 18, 1969, Apollo 10 served as a dress rehearsal for the first moon landing two months later, testing every aspect of the mission but touching down on the lunar surface.

The crew aboard the @space_station received a special call this morning from @Snoopy & the Schulz family in Mission Control! As we celebrate the 50th anniversary of Apollo 10, we’re working with Peanuts to share STEM curriculum for students. More: https://t.co/oxyBjDdkQi pic.twitter.com/p6P5YsLYXnApril 25, 2019

The call sign for the Apollo 10 command module was "Charlie Brown," while the mission's lunar module was named for his beagle, "Snoopy." Apollo 10 crewmates Tom Stafford, Gene Cernan and John Young adopted the Peanuts characters as their semi-official mascots.

"What a very special occasion to dedicate this beautiful mural," said Greg Dorth, a manager in the International Space Station External Integration Office at Johnson Space Center. "We could not be more excited that our node mockup is included in this wonderful display."

"When I look up here and I see this, I think of inspiration, connectivity, exploration, and to me that is what the arts bring to science," said Dorth.

During the ceremony, Scharf completed the installation using colorful spray paints to create a galaxy, star and atom-filled design, which he finished with the outline of Snoopy's head.

"NASA and space exploration has been an inspiration since I was able to digest the world around me," Scharf told collectSPACE. "And because I am such a space fanatic, I decided to do the Peanuts characters as zodiac constellations."

In addition to celebrating the Apollo 10 50th anniversary, the debut of Scharf's art installation also served as the Houston Arts Alliance launch for the Peanuts Global Artist Collective murals, a public art initiative that places Schulz's characters into the hands and imaginations of contemporary artists.

"We are thrilled that this is the first part of it with Kenny Scharf creating these murals," said Leigh Smith, chair of the Houston Arts Alliance's board of directors. "We are thrilled that this piece sits here, on a property where all of you are here to enjoy Space Center Houston, and as you come down the road you will see these beloved characters in this great art."

The installation also heralded a new collaboration between NASA and Peanuts Worldwide on educational activities that aim to share the excitement of science, technology, engineering and mathematics (STEM) with a new generation. The partnership incorporates Snoopy and the other Peanuts characters in new content focused on NASA's next deep space exploration missions.

"Having an art installation like this, which is very interpretive, that captures your imagination and also merges popular culture with something that is science-oriented is a great way to appeal to people and get them to think about art and space in different ways than they may have in the past," said Willam Harris, Space Center Houston's president and CEO. "Not only are we opening this exhibit here today, but we also inaugurated the NASA-Peanuts STEM curriculum, to try to use the Peanuts characters to inspire STEM learning, which is very exciting.”

Click through to collectSPACE for more photos of Kenny Scharf’s Peanuts art installation.