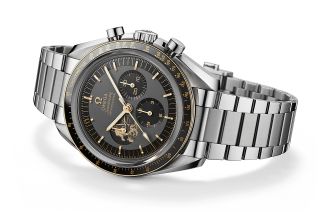 Two Apollo 11 tributes are found on the dial of the Speedmaster Apollo 11 50th Anniversary Limited Edition. A number "11" features in 18K Moonshine Gold at 11 o'clock. More notably, the 9 o'clock subdial shows Buzz Aldrin climbing down to the surface.
(Image: © Omega)

A new chronograph captures the time, 50 years ago, when the first wristwatch was worn on the surface of the moon.

On July 20, 1969, Apollo 11 astronaut Buzz Aldrin became the second human to walk on the moon — and the first to wear a watch while doing so. Now, half a century later, the maker of that well-traveled timepiece has included that detail on the face of a new, limited edition watch created to commemorate the mission's 50th anniversary.

"The 9 o'clock subdial shows Buzz Aldrin climbing down onto the lunar surface," writes Omega on its website, describing the "Moonshine Gold" subdial that is laser engraved with Aldrin's image on its newly-revealed Speedmaster Apollo 11 50th Anniversary Limited Edition watch.

Aldrin, Neil Armstrong and Michael Collins each wore a NASA-issued Omega Speedmaster on the Apollo 11 mission. After Armstrong and Aldrin landed on the moon, Armstrong chose to leave his Speedmaster inside the lunar module as a backup to an on board timer. As such, Aldrin became the first to wear a watch on the lunar surface.

Announced on Friday (May 17), the new steel-body Speedmaster is the second chronograph Omega has produced to mark the golden anniversary of the first moon landing. The company previously introduced an 18-karat gold model based on the commemorative Speedmaster watches that Omega presented to the Apollo 11 crew and other NASA astronauts after Armstrong, Aldrin and Collins returned safely to Earth.

The stainless steel Speedmaster Apollo 11 50th Anniversary Limited Edition also incorporates gold, or more specifically, Omega's proprietary Moonshine Gold, a new patent-pending alloy that is described as being a "paler hue than traditional yellow gold" and has a higher resistance to fading. The gold can be found on the Speedmaster's indexes, bezel, the Omega logo on the watch's face and almost all of the hands.

One of the indexes on the chronograph's face stands out as a nod to the mission.

"The 11 o'clock index pays tribute to Apollo 11's iconic mission number," writes Omega, referring to the Arabic numeral "11" that is in place of the single gold bar that is used at for the other hour markers.

Further homages to the mission's history can be found on the watch's reverse. The blackened inner caseback features a laser-engraved Apollo astronaut's bootprint embedded in the lunar surface. Adding to the iconic scene are the words that Armstrong spoke after he first set foot upon the moon, "That's one small step for a man, one giant for mankind," and the reticles, or crosshairs, that were common to Apollo photographs.

"Proud owners will find their unique [edition] number engraved in black on the caseback, along with 'Apollo 11 50th Anniversary,'" writes Omega.

The watch is presented on a brushed metal bracelet, but included is also a Velcro strap with black-coated cork. "This innovative design is a salute to the Apollo-era 'boost protective cover' — a fiberglass structure covered with cork, which [fit] over the command module like a glove, keeping the crew of the Saturn V rocket safe from the intense heat produced at launch," says Omega.

"There were many world-changing moments that defined the first lunar landing in 1969. From famous words to dusty footprints, it was a mission that remains unforgettable in so many ways," writes Omega. "On the 50th anniversary of Apollo 11, Omega is proud to unveil a new Speedmaster Limited Edition that pays tribute to those iconic hours."