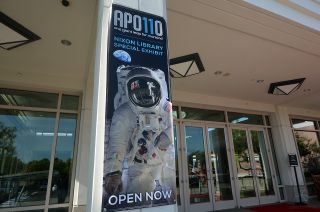 The Richard Nixon Presidential Library and Museum has opened a new exhibit, "Apollo 11: One Giant Leap for Mankind," in recognition of the 50th anniversary of the first moon landing.
(Image: © collectSPACE.com)

His signature landed there, he spoke to the astronauts on its surface and now, 50 years later, his museum is exhibiting the history that connects Richard Nixon to the moon.

"Apollo 11: One Giant Leap for Mankind," the newly-opened exhibit at the Richard Nixon Presidential Library and Museum in Yorba Linda, California, uses artifacts and imagery from the National Archives and Smithsonian to guide visitors through the rise of the 1960s space race that led to the first humans walking on the moon.

"Richard Nixon remains the only president with his name on a plaque on the lunar surface," the library stated in a release.

Related: Presidential Visions for Space Exploration: From Ike to Trump

The exhibition, which runs through Jan. 12, 2020, includes photos and replicas of the plaque, which Apollo 11 astronauts Neil Armstrong and Buzz Aldrin read from and which remains today on the lunar surface.

"'Here men from the planet Earth first set foot upon the moon, July 1969 A.D. We came in peace for all mankind,'" read Armstrong while at Tranquility Base on July 20, 1969. "It has the crew members' signatures and the signature of the President of the United States."

The exhibit displays a replica of the plaque on a full-scale model of a lunar module leg, alongside a 3-D printed, life-sized statue of Neil Armstrong in his Apollo 11 spacesuit. The same area includes the exhibition's originally-created, 360-degree virtual reality experience, which immerses guests in the moment when Armstrong took his "one giant leap for all mankind."

Another copy of the metal plaque — this one a silver memento from the August 1969 dinner that Nixon hosted to honor Armstrong, Aldrin and Michael Collins — is displayed with the Presidential Medal of Freedom that Nixon presented to Collins at the same event (Armstrong and Aldrin were also awarded similarly at the same time).

Nearby, the exhibit includes a partial mockup of the mobile quarantine facility that housed the Apollo 11 crew after splashdown. Nixon greeted the astronauts through one of its windows on July 24, 1969 aboard the USS Hornet recovery ship.

"Hello, Neil and Buzz. I'm talking to you by telephone from the Oval Room at the White House. And this certainly has to be the most historic telephone call ever made," said Nixon.

The same olive green, push-button telephone that Nixon used that day is part of the "Apollo 11: One Giant Leap for Mankind" exhibit. It is displayed in a recreation of a typical 1969 American living room where visitors can watch and hear the call on a period-correct television set.

"Because of what you have done, the heavens have become a part of man's world. And as you talk to us from the Sea of Tranquility, it inspires us to redouble our efforts to bring peace and tranquility to Earth. For one priceless moment in the whole history of man, all the people on this Earth are truly one," said Nixon.

Other features of the exhibition include an X-15 rocket plane pressure suit like the type worn by Armstrong before he became a NASA astronaut, Aldrin's penlight used during the Apollo 11 mission, a recreation of an Apollo command module and moon rocks returned to Earth by the Apollo 15 and Apollo 17 astronauts. (The five lunar landings that followed Apollo 11 happened during the Nixon administration.)

In addition to the "Apollo 11: One Giant Leap for Mankind" special exhibition, the Nixon Presidential Library and Museum also displays replica Apollo 11 and Apollo 17 spacesuits in its permanent gallery. Outside the museum, guests can also find a short concrete pathway where Buzz Aldrin embedded his boot prints to celebrate the 30th anniversary of the Apollo 11 mission 20 years ago.

Click through to collectSPACE to see more photographs of the "Apollo 11: One Giant Leap for Mankind" exhibit at the Richard Nixon Presidential Library and Museum.