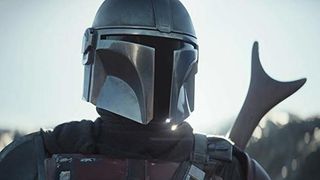 Disney+ has announced that the penultimate episode of The Mandalorian's first season will have an "exclusive sneak peek" at the upcoming "Star Wars: The Rise of Skywalker" film.

"An old rival extends an invitation for The Mandalorian to make peace," reads a Disney Plus description of the seventh episode. The title of the episode has not been announced, however "The Sin"'s Deborah Chow is returning to direct from a script by showrunner Jon Favreau.

The streamer has moved up the episode up from the show's usual Friday spot to air on Wednesday, December 18 — ahead of Rise of Skywalker's Thursday afternoon Dec. 19 theatrical debut.

In the show's Dec. 27 season finale, the Mandalorian will come "face-to-face with an unexpected enemy." Someone from "Rise of Skywalker" turning up would be unexpected for us at least, eh?