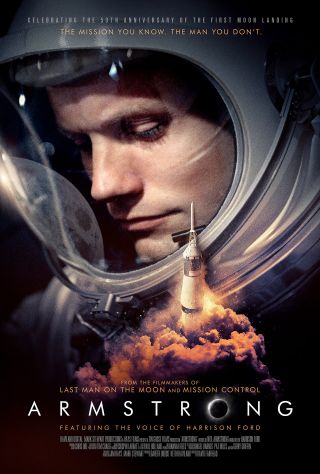 Movie poster for "Armstrong," the new documentary about the first man to walk on the moon, Neil Armstrong.
(Image: © Gravitas Ventures)

Harrison Ford gives voice to the first man to walk on the moon in a new documentary coming to theaters just in time for the 50th anniversary of the Apollo 11 mission.

"Telling this story is a documentary filmmaker's dream," Fairhead said in a statement. "When Neil made his small step onto the lunar surface, it marked his transformation from mere man to global celebrity — something he spent the rest of his life trying to avoid. Through the testimony of colleagues, friends and family we outline his achievements and tell the seemingly familiar, yet also little known tale of the first man on the moon."

In addition to sharing their family's private film reels, Mark and Rick Armstrong, Neil Armstrong's sons, also collaborated with the filmmakers, on and behind the camera.

"He got his pilot's license before he got he his driver's license," recounts Mark Armstrong of his father in the film's newly-released trailer. "It was more important for him to be able to fly."

"He's the best person of all of us to have been the first man on the moon," says Scott in the trailer.

Armstrong died in 2012 at the age of 82. The film lets Armstrong speak for himself, though, by having actor Harrison Ford narrate the astronaut's own words.

"To stand on the surface of the moon and look at the Earth high overhead is certainly a unique experience. The importance of protecting and saving that home has never been felt more strongly," says Ford, reading from Armstrong's remarks.

"Armstrong" is Fairhead's second turn directing a documentary about the Apollo program. In 2017, he and "Armstrong" producers Gareth Dodds and Keith Haviland helmed "Mission Control: The Unsung Heroes of Apollo" about the men who monitored from the ground Armstrong's and the other astronauts' journeys.

Fairhead, Dodds and Haviland also worked together on the 2014 documentary "The Last Man on the Moon" about Apollo 17 commander Gene Cernan.

"We were delighted to collaborate with the filmmakers, who did such a remarkable job with 'The Last Man On The Moon' and 'Mission Control: The Unsung Heroes of Apollo,' on this wonderful portrait of our dad," said Mark and Rick Armstrong. "We hope audiences enjoy the opportunity to see some very rare footage of him and to share in celebrating his memory and his achievements."

"We are very excited to continue our partnership with David, Keith and Gareth on this captivating documentary about Neil Armstrong. Gravitas is proud to be releasing this film just as we as a nation celebrate the 50th anniversary of Armstrong's famous moon landing," said Nolan Gallagher, founder and CEO at Gravitas Ventures.

Gravitas Ventures acquired the North American rights and all worldwide rights excluding the United Kingdom, Ireland and Australia to "Armstrong." Altitude Film Distribution will release the film in the UK and Irish cinemas, also on July 12.

Click through to collectSPACE to watch the new trailer for the "Armstrong" documentary.