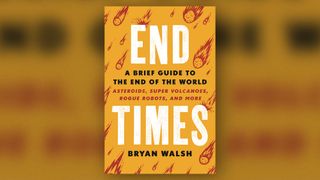 Step right up and pick your doomsday — and then figure out what we could theoretically do, if we tried to avoid meeting that fate.

That's the premise that unfolds over the course of "End Times: A Brief Guide to the End of the World: Asteroids, Supervolcanoes, Rogue Robots, and More" (Hachette Books, 2019), written by science journalist Bryan Walsh. In the book, Walsh explores eight possible ways life on Earth could change dramatically — but he also highlights the ways in which modern society is potentially equipped to avoid, or at least mitigate, those threats. (You can read an excerpt from "End Times" here.)

Walsh made use of his background reporting on threats like the SARS epidemic and climate change, and he talked with Space.com about the more cosmic challenges he tackles in his book. This interview has been edited for length and clarity.

Space.com: How did you come to write this book?

Bryan Walsh: I began to realize that there was a growing body of science that was looking at these existential threats in a holistic way. It's not just, you focus on the environment, you focus on issues from space or technology, but actually you can look at them all at once. What I came to realize was you had a situation where, on the one hand, we're facing greater amounts of risk; on the other hand, we have much more leverage and ability to do something about it. …

This book isn't really about, oh, the world is in great peril and we're all going to die, but rather, it's within our power and responsibility — for both people living on the planet now and also everyone who could live in the future — to do something about it.

Space.com: How did you choose which disasters to include in the book?

Walsh: They were the ones that really just jumped out in terms [of being] the most threatening, but also they were ones I could examine in turn and tell a different part of the overall story through them. So something like asteroids: There's a reason why we make movies about that. There's something cinematic about the idea that something's coming from space and locking in on you, and it's going to destroy the world. But also, it showed our ability to actually use technology to protect ourselves from something that has erased life on this planet before.

With something like volcanoes, because they've recurred much more often than asteroids, I could actually look at the past and see how that's impacted human beings before. There was a supervolcano called Toba that exploded about 74,000 years ago that really had a measurable impact on human beings of the time. ... I picked the ones I felt would fit into an overall narrative that I hope at the end gives you a really broad picture of all these risks and what they mean when they're combined.

There are also very, very uncommon cosmic risks, like gamma-rays, for instance, or that the sun could go supernova. I didn't really go into those because they're even less frequent than the already pretty infrequent natural risks I'm talking about here. But also, there's really nothing that can be done about that. There's no foreseeable technological future where we can do something about the sun blowing up, or some kind of gamma-ray, or some kind of cosmic-scale situation like that. So to me, there wasn't a lot to say at the end of the day [about these scenarios].

Space.com: What was it like visiting Catalina Station observatory to watch scientists hunting for near-Earth objects?

Walsh: Science generally moves pretty slowly. … In the search for near-Earth objects, there's kind of this instant gratification that goes into it. If you are lucky, you can find something in a night's observing, and you saw it, and you played a small part in actually defending the Earth, as grand as that sounds. And it sounds very grand when you're on top of a mountain outside Tucson, and it's cold, and you're in a small room, and you're just kind of staring at screens, which is basically what I was doing. But I do get the sense that there was that feeling, like, this goes beyond just standard science to something that has a bigger purpose.

It was also just fascinating to see how [the search] changed over time … now you have a wealth of data, you have a wealth of scanning, you have new tools that can use machine learning to find things and pick them out faster. … Technology is a threat in a lot of the different pictures I'm looking at here, but in every one of these, it plays a major role in keeping us safe as well, and so to be able to see that at play was pretty interesting. Also, it's just cool to be there at an observatory: To actually get a look at the sky in a way I'd never seen before was just really gratifying personally for me.

Space.com: Tell me about writing the chapter on aliens.

Walsh: That was one of my favorite chapters to write, actually. ... It was interesting to experiment — like, if there are aliens and they can make it here, well, we're pretty much out of luck. Because the technological difference would be so vast, it would be unimaginable. But there's a lot of really fascinating work being done about this, because it's the best clue we have to what might be happening to us in the future. ...

Especially if we do actually find basic life, [if we] can't find any evidence of other civilizations, that does sort of raise the risk of, "Is there something about technological development that actually causes existential risk and that actually may lead civilizations to destroy themselves?" It could be that they destroy each other, and there's a lot of fascinating work around that. … Even just opening [a message from other beings] would present an existential risk, because there would be no way to be sure that it would be safe. I don't know if that's the case, and I actually don't know what we would do in that event. I think we're so curious, it would be hard to imagine we wouldn't want to. ...

It's hard to tell our own future. But maybe there's something out there in the rest of the universe that could tell us. … And that's why knowing whether there is or isn't life out there in the universe isn't just about curiosity or the idea of, "Are we alone or not?" But it's the only thing we may be able to look to that could tell us in some confidence what's likely to happen to us.

Space.com: Near the end of the book, you touch on this idea of going interplanetary as a way to protect against these disasters. [Read the excerpt here.] What do you think of that idea?

Walsh: I think there's something captivating about the idea that if the Earth itself is a target or at risk or could be destroyed, the best way to safeguard ourselves is to expand — to not be geographically isolated on a single planet but to open it up to others, which does make some sense in a very long term [way]. My feeling about that was, that's pretty far in the future. It's hard to imagine a situation — no matter how badly we screw up the Earth, it doesn't matter how bad climate change gets or how big a nuclear war or what have you — [where] Mars is going to be a more hospitable place to live than the Earth. If I were to choose the money that could be spent on preparing for these risks, space settlement would not be high on that list, for that reason.

But I do think it does mesh onto my idea that in the future, we will need to expand. One thing, looking back over history, especially since industrialization, is that we are constantly pushing up against what seem like natural limits. … Every new technological innovation might solve one problem, but tends to introduce new ones. What I saw is that you have two paths in front of you: sustainability — you can try to live with less to a certain extent, you can try to pull back and live within safely defined boundaries; or, you can try to push forward and try to innovate ways around those limits, find new technologies, new forms of energy, new ways to expand and new environments that give you more space for more people.

So much of this goes back to the years I spent working on climate change. What I came to see was that human beings — we don't really seem to want to limit ourselves. You can make any kind of moral, ethical judgment about that, but that seems pretty encoded into us. And so the idea that we do need to continue to expand, the idea that we will need to find new space and new technologies, that's true to me. … That's our destiny, I think, and I do believe there's a benefit to that kind of growth.

Space.com: You reference science fiction, particularly films, throughout the book.

Walsh: I've always been a fan of science fiction. I've always felt that science fiction can really help us imagine the future, and sometimes imagination includes fear. … I just feel like it speaks to people, because the stakes are incredibly high; it can't get higher than the end of the world. But it also enables us to, almost the same way that children do with nightmares, play out what they're afraid of, and maybe in doing so actually figure out something. And sometimes they even have practical effects. [The films] "Armageddon" and "Deep Impact," I think, had a measurable impact on people's awareness of that risk, even if they're a little absurd, especially "Armageddon." It made it real in a way that actually does have an impact on policy.

Space.com: What's the most striking thing you learned about life while writing this book?

Walsh: You realize how this planet's changed over time in a way that, it's just hard to wrap your head around. And yet [there's] resilience, life came back from every one of those [extinction] waves, up to the point to us being here now, which is pretty amazing, I think. And I believe that we do have a great resilience. As much as we can be mismanaging things right now — and certainly, to a certain extent we are — I also learned by looking at smaller-scale disasters that humans are actually very good at coming together around those things. …

The ability to survive in many different types of environments, the fact that we've been able to spread through basically every corner of this planet, says something about humans as a species that is innovative, that is resilient. Those same qualities are a lot of the same qualities that might lead us to come close to destroying ourselves. … But I do actually feel hopeful, after all, that we can either manage it or, if we make a mistake, hopefully, it won't be the one that ends everything, and we can learn from that.

You can buy "End Times" on Amazon.com.