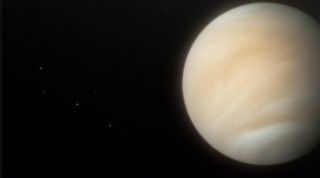 If human-induced climate change continues unchecked, 10 percent of the U.S. economy could evaporate by 2100, a 1,656-page federal report the White House slipped out on Black Friday (Nov. 23) warned — but a nearby world has an even hotter climate problem than ours, and scientists say we could learn some valuable lessons from it.

That world is Venus, Earth's "evil twin," which was once nice enough — until something went wrong and the atmosphere began trapping a little too much heat. Scientists aren't positive precisely how events played out, but the runaway greenhouse effect that resulted is beyond debate: Venus now clocks in at a staggering 880 degrees Fahrenheit (471 degrees Celsius).

"I think Venus is an important warning: Greenhouse atmospheres are not theoretical," Ellen Stofan, director of the Smithsonian's National Air and Space Museum and former chief scientist at NASA, told Space.com. And in fact, Venus has already warned us about a climate threat — Stofan said that it was studying our neighbor that prompted scientists to look for an ozone hole here on Earth. They found it, and in perhaps the only veritable climate success, international agreements have cut production of the compounds that eat away at ozone. [Japan at Venus: Photos from the Akatsuki Spacecraft's Mission]

Much of the appeal of Venus comes from the fact that despite its horrifying modern appearance, it's actually really similar to Earth. "Picture a planet that's just like Earth but it's a little hotter because it's a little closer to the sun — and that would be Venus," David Grinspoon, a planetary scientist and astrobiologist at the Planetary Science Institute, told Space.com.

Along with Mars, these planets form a trio of worlds that began with comparable sizes, materials and temperatures — until suddenly, they were very different. Once upon a time, Venus, like Earth today, was covered in water, perhaps even habitable. Then, gradually, something fell out of whack. "The basic mechanism is very simple: Everybody knows that if you heat up water you make steam," Grinspoon said. And water vapor is a powerful greenhouse gas, trapping still more heat. "There's nothing to really stop it until the oceans fully evaporate." (Today, Venus' atmosphere is almost entirely carbon dioxide; radiation from the sun likely broke up the water vapor, letting it escape into space.)

The divergent paths of Earth and its two neighbors pose an existential dilemma more powerful even than anthropogenic climate change: Humans or no, Earth's cozy environment won't last forever, either. "We think of habitability like, 'Oh, you have a habitable planet and it just stays that way,'" Stofan said. "Habitability can be very transient in a planet's history." Of the three, Earth's habitability window has lasted the longest, and Venus' was probably shorter than Mars, but scientists aren't yet sure by just how much, she added.

At a strictly intellectual level, data from Venus and Mars about how a planet and its atmosphere affect each other can be more intriguing than terrestrial data. "For a geologist, Venus is such a great planet because you have geology and you have the atmosphere and they're interacting with each other in a really interesting way without the mess of the biosphere," Stofan said. "It's kind of like a pure planet, which for a geologist is really fun."

But while Earth's biosphere may be intellectually annoying, we're all awfully fond of it, and that's a powerful reason to care about climates on other worlds. "It's no longer just a luxury because we're curious," Grinspoon said. "It's become an essential survival tool for us now."

Climate scientists are the first to tell you they want more data, more models, more to dig their teeth into. Some types of climate information does go back millennia, like the details trapped in columns of sediment that scientists can pull from the ocean floor, but climate data is skewed heavily toward modern years. [Amazing Venus Photos by ESA's Venus Express]

So doubling the number of planets you're looking at — even with limited data — makes a difference. "[Venus is] a laboratory for understanding climate physics and climate change on an Earth-like planet," Grinspoon said. "You can't learn everything you need to know about climate change on Earth by only studying Earth."

And unlike climate here on Earth, the same interactions on Venus don't have the kind of emotional drama attached to them. That means that Venus doesn't just offer new information — it also offers a new way of talking about climate, even with those who have taken an ideological stand against findings here on Earth.

"I've had some conversations with people in that camp that have been fruitful because I've used the example of Venus," Grinspoon said. "It allows you to sort of reframe the question — you're not just talking about policy choices on Earth. … It's not a cure-all for that difficult conversation, but I do think it can help."

Whatever humans do or do not choose to do about Earth's climate, someday countless years from now, as the sun swells in its old age, our world will travel the same path as Venus, with the oceans evaporating away into a runaway greenhouse world. By then, climate won't be a problem for any of us, but it's still a poignant reminder of what science can tell us about the world.

"I'm not saying, 'Oh, that's about to happen to Earth,'" Grinspoon said. "But the overall lesson still stands that climate stability is not something you can take for granted."