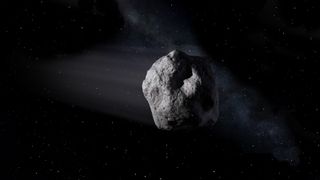 An artist's depiction of an asteroid.
(Image: © NASA/JPL-Caltech)

The quest to protect Earth from threatening asteroids is about to get a boost, as "an absolute flood of new observations" comes from a new telescope designed to scan the sky, says Ed Lu, co-founder of the B612 Foundation, a nonprofit organization devoted to planetary defense.

The Large Synoptic Survey Telescope (LSST) in Chile is anticipated to have "first light" in 2020, meaning that the telescope's mirrors will be exposed to the sky for the first time. Then full operations for its decade-long survey of the southern sky will commence in 2022, if all goes to plan. Lu said the telescope will spot tens of thousands of new asteroids in its first year alone, with many more to come.

Lu and others shared the latest developments in planetary defense just in time for Asteroid Day, an annual celebration on June 30 to discuss the science of asteroids and the possible threat they pose to Earth. While we know of no asteroids that will imminently cause damage to our planet, the possibility always exists, participants said in an Asteroid Day teleconference on Thursday (June 27).

Related: Humanity Will Slam a Spacecraft into an Asteroid in a Few Years to Help Save Us All

Between LSST and other already operational telescopes, Lu added, scientists anticipate they will quickly catalog "70% or more" of the asteroids — or space rocks — that are more than 460 feet (140 meters) in size. That statistic is relevant to Congress, which in 2005 asked NASA to catalog at least 90% of asteroids of those size by 2020, according to the agency. Lu acknowledged that scientists will not meet the deadline, but he said they would be able to generate that catalog with enough time and funding.

Lu said that scientists should start thinking now about how to frame new discoveries to the public. When LSST first spots these objects, observations of them will be so sparse that it will be hard to constrain the orbits of the asteroids. In the time before scientists are confident of these objects' paths, more of them could be seen as posing a threat to Earth simply because scientists can't get a read on where they are moving in space.

But smaller asteroids pose a threat too, just on a more local scale, said Mark Boslough — who was the first U.S. scientist to visit Chelyabinsk after a six-story object exploded over the Russian town in 2013. Even objects in the 130-foot (40 meters) size range can pose a threat to cities, he said.

Boslough cited the Tunguska Event, a 1908 incident in which an asteroid shattered in Earth's atmosphere and flattened 830 square miles (2,150 square kilometers) of Siberian forest. This and other "airbursts" are quite capable of causing a lot of property damage, so asteroids of a smaller size should also be included in disaster planning, he said.

"I've always thought we should be more concerned about those than we are [now], primarily because they are just so much more abundant. There is something like 10 million of those things," he said.

Boslough — a physicist at the Los Alamos National Laboratory — said these smaller objects perhaps shouldn't be cataloged, because there are so many of them. Instead, he recommends developing surveys that would note any that are imminently hurtling toward Earth. Then disaster planners could evacuate cities that might be under threat of the object, just like we do today for incoming hurricanes.

There are other opportunities to look for these objects as well. This summer, the Beta Taurid meteor stream from Comet Encke will be passing a little closer to Earth than usual. This swarm of objects is in a 7-to-2 resonance with the planet Jupiter, meaning that they orbit the sun seven times for every time that Jupiter orbits twice. The orbit of these objects intersects with that of Earth, although they don't pass close by our planet every year.

Telescopes will monitor the swarm for Tunguska-size objects in the coming weeks, because the swarm will be crossing through our orbit in late June, and continuing through August, he said. He added that evoking Tunguska is not a coincidence, because this object was "more than likely a Beta Taurid" based on the timing of it hitting Earth on June 30, 1908.

Another aspect of planetary defense is studying near-Earth asteroids up close. NASA's OSIRIS-REx (Origins, Spectral Interpretation, Resource Identification, Security, Regolith Explorer) mission is in orbit at asteroid Bennu, and Japan's Hayabusa2 is circling asteroid Ryugu. In the next few years, both spacecraft are expected to deliver samples to Earth.

And there's more to come. Patrick Michel, the co-investigator of forthcoming asteroid mission Hera, talked about the progress for that European asteroid mission. Hera is expected to launch in 2024 for the double asteroid Didymos. What makes Hera unique from past missions is it will work in tandem with a NASA spacecraft, called DART (Double Asteroid Redirection Test). DART will attempt to change the orbit of the moon of Didymos, and Hera will examine any crater DART leaves behind.

Hera is still in the planning stages and will go through another major approval milestone in November, Michel said. He added it's an important milestone for the European Space Agency, because it may be "the only asteroid mission possibly done by Europe within the next decade."

But asteroids aren't just dangerous — they could also become extremely valuable, according to Marc Serres, CEO of the Luxembourg Space Agency. Since they contain water and minerals — resources that can be used for space missions — he said the time to generate a catalog is now, before we begin exploring the solar system. As humans begin to move to the moon and other destinations, he said, it will be important to mine as much as we can along the way.

"Using the resources that we can find in space will completely revolutionize the way we act in space, because we don't need to bring everything with us," he said.