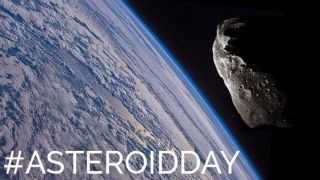 No matter where you are in the world, it's more than likely that you can participate in Asteroid Day — an international event meant to raise awareness of these small, rocky bodies.

While the day on Sunday (June 30) commemorates a large impact that flattened the forest in Tunguska, Siberia, in 1908, asteroids are interesting to study not only because of their threat to Earth, but also because they are time capsules of the early solar system.

NASA and many international partners continually hunt for threatening asteroids in the solar system. While we know of no imminent issues and have tracked 95% of all asteroids that could kill our civilization, there is more work to be done because many asteroids are smaller and thus more difficult to find.

Related: Humanity Will Slam a Spacecraft into an Asteroid in a Few Years to Help Save Us All

That's why the Chelyabinsk incident in 2013 caught everyone by surprise, when a body the size of a six-story building exploded over a Russian town and caused many injuries. Asteroid Day calls for a hundred-fold increase in asteroid monitoring; there is a petition available online for anyone who wants to sign.

Asteroids are also important worlds to study because they represent what the solar system used to look like billions of years ago, before the planets were formed from rocks that gradually stuck together under mutual gravity. That's why there are two missions right now studying asteroids — Japan's Hayabusa2 and NASA's OSIRIS-REx (Origins, Spectral Interpretation, Resource Identification, Security, Regolith Explorer). Both spacecraft will bring samples back to Earth for detailed study.

And closer to home, there are many events to help you learn more about asteroids on or around June 30 — more details are on the Asteroid Day website.

Asteroid Day Japan will have an expert panel including Makoto Yoshkkawa, mission manager of the Hayabusa2 mission. Yoshkkawa will speak at the Sundai Gukuen in Tokyo, and will be linked to five other sites around Japan.

Events are planned in Austria at the National History Museum in Vienna, in Greece at the Greek Meteorite Museum, and in Luxembourg at the Luxembourg Space Agency and National Museum of Natural History. (The Asteroid Foundation is headquartered in Luxembourg).

Asteroid Day was founded five years ago by an eclectic group: Brian May (astrophysicist and lead guitarist for the band Queen), Danica Remy (president of the B612 Foundation, which focuses on asteroid defense techniques), Rusty Schweickart (Apollo 9 astronaut), and Grig Richters, a filmmaker.