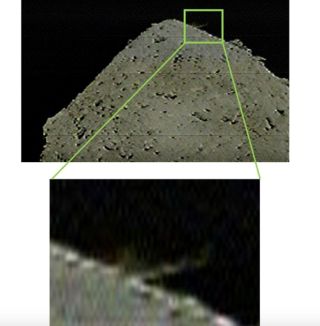 Asteroids have pummeled Earth for billions of years, and now Earth has finally struck back.

Japan's Hayabusa2 spacecraft slammed a copper cannonball into the 3,000-foot-wide (900 meters) asteroid Ryugu last night (April 4), in an effort to blast out a crater that the probe can study in detail over the coming weeks and months.

The "Small Carry-on Impactor" (SCI) operation began at around 10 p.m. EDT (0200 GMT on April 5) when the 4.4-lb. (2 kilograms) copper plate deployed from the Hayabusa2 mothership. About 40 minutes later, explosives behind the plate detonated, sending the projectile hurtling toward Ryugu at 4,500 mph (7,240 km/h).

The shot hit its target — and Hayabusa2 even got a picture of the impact.

"After the start of the operation, the camera (DCAM3) [that] separated from Hayabusa2 captured an image that shows ejection from Ryugu’s surface, which implies that the SCI had functioned as planned," Japan Aerospace Exploration Agency (JAXA) officials wrote in an update this morning.

"Hayabusa2 is operating normally," they added. "We will be providing further information once we have confirmed whether a crater has been created on Ryugu."

DCAM3 was needed because the Hayabusa2 mothership had retreated behind Ryugu, to protect itself from the rain of debris generated by the impact.

Last night's bombing run was just one of many milestones that Hayabusa2 has checked off since arriving at the carbon-rich Ryugu last June. The spacecraft dropped two tiny hopping rovers onto the asteroid's boulder-strewn surface in late September, for example, then put a 22-lb. (10 kg) lander down two weeks later.

And in February, Hayabusa2 itself spiraled down to Ryugu, snagging a sample of rock and dirt in a brief touchdown operation. This material is scheduled to come down to Earth in a special return capsule in December 2020.

Hayabusa2 may snag another sample as well — from the crater it just made, provided the SCI operation generated one big enough for the mothership to find. The probe will definitely eye that crater from afar, studying the pristine, newly unearthed material. (The rock and dirt on Ryugu's surface has been weathered extensively by space radiation.)

A second sampling operation could follow as well, if mission team members deem it safe to conduct, JAXA officials have said.

Hayabusa2 also still has one more little hopper on board, which it may deploy sometime this summer.

The various data gathered by Hayabusa2 at Ryugu, and by scientists poring over the returned sample here on Earth, should help researchers better understand the solar system's early days, JAXA officials have said. The mission could also shed light on the role that asteroids like Ryugu may have played in helping life get started on Earth — by delivering lots of water and organic molecules to our planet, for example.

Hayabusa2 isn't the first deep-space bomber. In 2005, for example, NASA's Deep Impact probe barreled into Comet Tempel 1, to help scientists better understand comet composition. And in 2010, NASA's LCROSS mission slammed an impactor into a crater near the moon's south pole, revealing significant amounts of water there.

And another asteroid will get walloped soon, if all goes according to plan. NASA's Double Asteroid Redirection Test (DART) mission aims to slam an impactor into a moon of the asteroid Didymos in 2022, to better understand how humanity could deflect potentially dangerous space rocks headed toward Earth.

A European probe called Hera will aid in this assessment, gauging up close how the impact affects the Didymos system. Hera may even be on the scene in time to watch the collision.