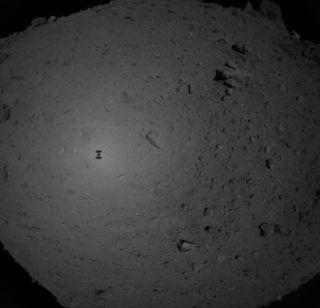 Japan's Hayabusa2 spacecraft captured this photo during its sample-grabbing descent toward the asteroid Ryugu on Feb. 21, 2019. The probe's shadow is visible on the space rock's surface.
(Image: © JAXA)

A Japanese asteroid probe has grabbed its first space-rock sample.

Hayabusa2 spiraled down to Ryugu's surface, fired a 0.2-ounce (5 grams) tantalum "bullet" into the boulder-strewn rock at close range, and collected pieces of the ejected material using its specialized "sampling horn," JAXA officials said during a press conference this evening.

Mission team members announced at about 6:30 p.m. EST (2330 GMT) today that the order to fire the bullet had been issued, and that Hayabusa2 had moved away from Ryugu as planned. But it took a few more hours for them to confirm that the bullet had indeed fired, and that sample collection occurred.

Hayabusa2 launched in December 2014 and arrived at Ryugu in June of last year. The mission had already made contact with the asteroid's surface several times before today's milestone: In September, the Hayabusa2 mothership dropped two tiny hopping rovers onto the rock, then did the same with a microwave-size lander called MASCOT a few weeks later.

Hayabusa2's main goal is to help scientists better understand the solar system's early history and evolution, as well as the role that carbon-rich asteroids such as Ryugu may have played in life's emergence on Earth.

The collected samples are key to this objective: The Ryugu material will come down to Earth in a special return capsule in December 2020. Scientists in labs around the world can then scrutinize the stuff with far more advanced equipment than the Hayabusa2 team could pack onto a single spacecraft.

The sample bounty will include more than just the material Hayabusa2 collected today. The mothership is expected to grab two more samples in the coming weeks and months. The second sampling sortie will unfold much like today's did, but the third will be dramatically different: Hayabusa2 will fire a copper projectile into Ryugu, wait a bit for the dust to clear, and then swoop in to grab material from the newly created crater. This formerly subsurface stuff will be pristine, unaffected by weathering from deep-space radiation.

Today's sample grab — the culmination of a descent-and-acquisition maneuver that lasted three days — was originally supposed to occur in October. But Hayabusa2's imagery revealed Ryugu's surface to be more rugged than expected, and the mission team wanted more time to find and characterize a safe sampling site.

Hayabusa2 isn't the only asteroid-sampling mission going right now. NASA's OSIRIS-REx spacecraft, whose goals are similar to those of Hayabusa2, has been orbiting the carbon-rich asteroid Bennu since Dec. 31. OSIRIS-REx is scheduled to grab Bennu bits in mid-2020 and return them to Earth in September 2023.

Both probes are extending a trail blazed by the original Hayabusa mission, which arrived at the stony asteroid Itokawa in 2005. Hayabusa returned tiny pieces of that space rock to Earth in 2010. (The first Hayabusa aimed to get a larger sample, but its bullet did not fire as planned.)

This story was updated at 9:15 p.m. EST to confirm that sample collection was indeed successful.