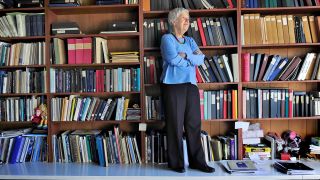 Astronomer Vera Rubin — best known for her pioneering research on dark matter — will lend her name to a new telescope if a bipartisan bill passes Congress and musters presidential approval.

The bill's text notes some of the challenges Rubin — who died in 2016 at age 88 — faced as a female astronomer in a male-dominated profession.

"Dr. Rubin faced barriers throughout her career because of her gender," the bill states. "For instance, one of the world's leading astronomy facilities at the time, the Palomar Observatory, did not permit women. Dr. Rubin persisted and was finally allowed to observe at Palomar in 1965, the first woman officially allowed to do so."

Her astronomical work later led to discoveries about dark matter, a cosmic substance so difficult to observe that it is still puzzling astronomers nearly 50 years after her study. Dark matter and dark energy together appear to make up most of the universe, but they cannot be seen directly; no one knows exactly what makes up dark matter.

"In 1970, Dr. Rubin published measurements of the Andromeda galaxy showing stars and gas orbiting the galaxy's center too fast to be explained by the amount of mass [there]," according to the bill.

"In the years that followed, Dr. Rubin and her collaborators used their observations, in conjunction with the work by earlier astronomers on the rotation of stars in spiral galaxies, to provide some of the best evidence for the existence of dark matter. This work contributed to a major shift in the conventional view of the universe, from one dominated by ordinary matter such as what produces the light of stars, to one dominated by dark matter."

In a House of Representatives statement released about the bill, Rubin's family members said they were happy the legislature is considering the renaming. "We believe that this is a great way to honor our mother's achievements in astronomy and her work for equal rights for women in science," the statement attributes to three of her four children — Allan, David and Karl. All of Rubin's children became "Ph.D offspring," according to a 2003 profile in Nature: two geologists, an astronomer and a mathematician.

The Large Synoptic Survey Telescope is a wide-field instrument designed to photograph the entire sky above it every few nights. The telescope is under construction in Chile and expected to come online in the 2020s, performing work such as scanning for dangerous near-Earth asteroids and looking for possible interstellar objects entering our solar system. (The first known interstellar object, 'Oumuamua, zoomed through our neighborhood in 2017.)

Fittingly, the telescope's observations could also help scientists solve some of the mysteries of dark matter and dark energy. Because the LSST will look at billions of galaxies over time, scientists hope its images will help them see how the two forces slowly shape the universe around us.