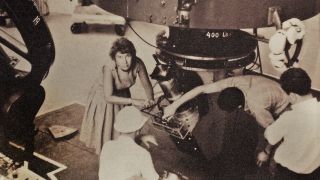 Vera Rubin at work at the Lowell Observatory in Flagstaff, AZ in 1965.
(Image: © Washington Times/Zuma)

Astronomer Vera Rubin changed the way we think of the universe by showing that galaxies are mostly dark matter.

On a dry and clear night at the Kitt Peak Observatory in the mountains of southern Arizona, Rubin closely observed the spectra of stars in the Andromeda Galaxy to determine their velocities. Conditions for observation were perfect, if not for the heat rising from the Sonoran Desert below. Rubin alternated between eating ice cream cones and developing exposures just taken by her colleague, Kent Ford, in the observation deck. It was their first successful night determining how fast the galaxy's stars rotate around its center (what astronomers call the rotation curve). It was 1968, and the motions of galaxies were still a mystery.

"The surprises came very quickly," Rubin recalled years later in a written account of her life. "By the end of the first night, we were puzzled by the shape of the rotation curve."

The rotation curve was flat, meaning the stars in the outer spirals of the galaxy were orbiting at the same speed as stars near the center. More alarming, the stars in the outer spirals were orbiting so fast they should have flown apart. The mass of visible stars wasn’t enough to hold the galaxy together. There was an extraordinary amount of matter missing.

The Andromeda Galaxy became the first of many galaxies with unexplainable rotation curves, which Rubin observed with Ford. Rubin's decades of discoveries revealed there was much more to the universe than meets the eye. The cosmos was chock-full of dark matter.

Swiss astronomer, Fritz Zwicky, first proposed the existence of dark matter in 1933 after observing the motion of galaxies in the Coma Cluster. The cluster of galaxies he observed should have flown apart if there was no additional mass holding them together. Lacking further evidence, his idea was quickly dismissed by the scientific community.

Thanks in large part to Rubin's work, scientists now believe that only about 20% of matter in the universe is visible. The other 80% is dark matter.

But what is dark matter?

"We don't know," said Regina Caputo, an astrophysicist at NASA's Goddard Space Flight Center. "We know what it isn't. It's not made up of 'normal' matter like protons, neutrons, electrons or neutrinos. We know it's stable. We know it's not charged. We have a range of masses that it can be. But beyond that, we haven't figured it out yet."

Inspired by Rubin, Caputo has spent most of her career trying to detect dark matter. She currently uses gamma-ray observations from the Fermi Gamma-ray Space Telescope to find signs of dark matter in the hearts of galaxies.

Rubin's affinity to astronomy began at a young age. She was born on July 23, 1928, from two Jewish immigrant parents who encouraged Rubin's scientific interests from the start. Her father helped her build a cardboard telescope, which she used to photograph the motion of stars. Her mother persuaded the librarian to let Rubin checkout science books from the adult section of the local library. But it was mostly Rubin's undying curiosity that drove her.

"By about age 12, I would prefer to stay up and watch the stars than go to sleep," Rubin said in an interview with Alan Lightman in 1989. "I started learning. I started going to the library and reading. But it was initially just watching the stars from my bedroom that I really did. There was just nothing as interesting in my life as watching the stars every night."

Her eagerness to learn always overshadowed the loneliness she felt as a woman in the field of astronomy. According to American Museum of Natural History, Rubin was the sole astronomy student in her graduating class of 1948 at the all-women's Vassar College in New York. When she attempted to apply to Princeton for graduate school, they refused her because the astronomy program did not accept female students. Unfazed, she attended Cornell and Georgetown universities for graduate schools.

At Georgetown, she had to balance family and research. With one child to take care of and another on the way, she began her doctoral studies by taking classes at night. Her husband, Robert Rubin, would drive her to the university, waiting in the car as she studied.

Years later, she would become the first woman allowed to observe at the famed Palomar Observatory — the same observatory Fritz Zwicky used to observe the Coma Cluster. Seeing that the only bathroom in the observatory was labeled 'MEN', she drew a skirted-woman and pasted it over the door.

Rubin's research during her early career was largely unaccepted by her colleagues. Her master's thesis on the large-scale motions of galaxies was controversial. Her doctoral thesis was largely ignored.

Wanting to avoid more competitive or contentious research areas, Rubin began researching the rotation of galaxies. This led Rubin to a permanent position at the Carnegie Institution in Washington D.C., where she met and teamed up with Kent Ford.

Rubin continued her research unveiling the presence of dark matter in numerous galaxies during the remainder of her career. The growing amount of evidence from her research would make the case for dark matter undeniable.

In recognition of her contributions to astronomy, she was elected to the National Academy of Science in 1981. In 1993, President Bill Clinton awarded her the National Medal of Science. Although she was overlooked by the Nobel committee, she was and has remained an inspiration for women in science.

"I really identified with her struggles getting a permanent position," Caputo told Space.com. "She bounced around from job to job for over a decade. However, her struggle inspired me to keep pushing, do what I love and really believe that something will work out. And now, I'm a scientist at NASA."

Rubin died on Christmas Day in 2016, at age 88. She is memorialized in the solar system. Vera Rubin Ridge in the Gale crater on Mars and the asteroid, 5726 Rubin, were named in her honor. Her four children inherited her curiosity of the universe, each holding doctorates in the sciences.

"My life has been an interesting voyage," Rubin wrote in 2011. "I became an astronomer because I could not imagine living on Earth and not trying to understand how the Universe works."