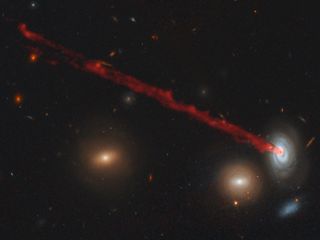 A glowing red stream of hydrogen gas emanates from the spiral galaxy D100 as it plunges toward the center of the giant Coma galaxy cluster. Glowing blue clumps of young stars can be seen near the middle of the tail, where there is still enough hydrogen gas to fuel star formation.
(Image: © Hubble image: NASA, ESA, M. Sun (University of Alabama) and W. Cramer and J. Kenney (Yale University); Subaru image: M. Yagi (National Astronomical Observatory of Japan))

NASA's Hubble Space Telescope captured a stunning new view of a spiral galaxy that wandered too close to the massive Coma galaxy cluster and is being stripped of its gas.

The spiral galaxy, named D100, is being pulled by gravity toward the dense center of the Coma cluster, located approximately 330 million light-years from Earth. As the galaxy plunges toward the cluster, it is stripped of its gas, creating a long, thin tail that stretches about 200,000 light-years — nearly the width of two Milky Way galaxies, according to a statement from NASA.

The galaxy's tail consists of dust and hydrogen gas. As the galaxy wades through intergalactic material surrounding the cluster, gas and dust is expelled from the galaxy. [Celestial Photos: Hubble Space Telescope's Latest Cosmic Views]

Eventually, D100 will run out of hydrogen gas, which the galaxy needs in order to form new stars, and become a dead relic, according to the statement.

"This galaxy stands out as a particularly extreme example of processes common in massive clusters, where a galaxy goes from being a healthy spiral full of star formation to a red and dead galaxy," William Cramer, lead author of the study and a researcher at Yale University in Connecticut, said in the statement. "The spiral arms disappear, and the galaxy is left with no gas and only old stars. This phenomenon has been known about for several decades, but Hubble provides the best imagery of galaxies undergoing this process."

Researchers estimate that D100 has been enduring the process, also known as ram-pressure stripping, for roughly 300 million years.

While D100 is one of many galaxies in this situation, one factor distinguishes it from others that astronomers have seen and modeled: D100's tail is much more smooth and well-defined than most such galaxies, according to the study.

"This is a surprise, because a tail like this is not seen in most computer simulations. Most galaxies undergoing this process are more of a mess," Jeffrey Kenney, a co-author on the study who's also at Yale University, said in the statement. "The clean edges and filamentary structures of the tail suggest that magnetic fields play a prominent role in shaping it. Computer simulations show that magnetic fields form filaments in the tail's gas. With no magnetic fields, the tail is more clumpy than filamentary."

The Hubble data revealed that the gas-stripping process began on the outer edges of the galaxy and is now moving in toward the center. Hot, glowing, blue clumps of young stars also appear in the image, with the brightest such clumps in the middle of the tail, where there is still enough hydrogen gas to fuel star formation, according to the statement.

However, the researchers estimated that in a few hundred million years D100 will lose its spiral structure altogether and consist of only old, red stars. The findings were published Jan. 8 in the Astrophysical Journal.