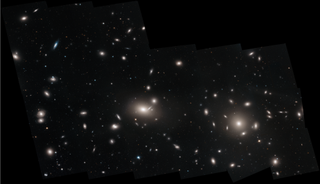 An enormous cosmic neighborhood that's home to more than 1,000 gravitationally bound galactic neighbors is bursting with thousands of stray star clusters, images from the Hubble Space Telescope have revealed.

While conducting a comprehensive survey of the Coma Cluster of galaxies, astronomers using the Hubble Space Telescope counted 22,426 globular star clusters scattered throughout the space between those galaxies. Each of those dense, spherical groups contains hundreds of thousands of ancient stars that huddle together because of their mutual gravitational attraction, much like the larger galaxies that make up the Coma Cluster.

Located more than 300 million light-years from Earth in the constellation Coma Berenices, the Coma Cluster is one of the first places where scientists found evidence of dark matter, an invisible form of mass that can only be detected by the gravitational effects it has on its visible surroundings. [Gallery: Dark Matter Throughout the Universe]

"Because globular clusters are much smaller than entire galaxies – and much more abundant – they are a much better tracer of how the fabric of space is distorted by the Coma Cluster's gravity," NASA officials said in a statement.

Astronomers think that the wandering star clusters once belonged to galaxies in the Coma Cluster but were "orphaned from their home galaxy due to galaxy near-collisions inside the traffic-jammed cluster," NASA officials said. Hubble imagery has revealed that some of these outcast star clusters line up in "bridge-like patterns," which NASA officials said is "telltale evidence for interactions between galaxies where they gravitationally tug on each other like pulling taffy."

Astronomers have been investigating the galaxies and star clusters in the Coma Cluster since 2006, when the Hubble Space Telescope started collecting data for the Coma Cluster Treasury Survey using an instrument called the Advanced Camera for Surveys (ACS). But that project was put on hold when the ACS suffered an electronics failure and went into safe mode later that year. Astronauts ended up repairing the camera during the STS-125 Hubble servicing mission in 2009.

In lieu of the ACS data they had initially counted on, a team of astronomers led by Juan Madrid of the Australian Telescope National Facility in Sydney came up with a workaround to fill in the gaps. Madrid and his colleagues, along with a crew of undergraduate student researchers, "painstakingly pulled numerous Hubble images of the galaxy cluster taken from different Hubble observing programs" to stitch together a mosaic of the Coma Cluster's central region, NASA officials said.

"One of the cool aspects of our research is that it showcases the amazing science that will be possible with NASA's planned Wide Field Infrared Survey Telescope (WFIRST) that will have a much larger field of view than Hubble," Madrid said in the statement. "We will be able to image entire galaxy clusters at once."

Their entire census of the Coma Cluster was published Nov. 9 in The Astrophysical Journal.