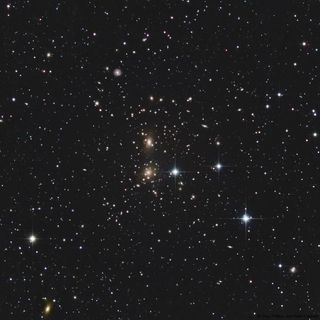 The Coma galaxy cluster is a collection of more than 650 galaxies about 300 million light-years from Earth in the constellation Coma Berenices. Also known as Abell 1656, the galaxy cluster is one of the densest ones known.
(Image: © Greg Parker, New Forest Observatory)

A vast cluster of dead galaxies roughly 300 million light-years from Earth may hold as much as 100 times more dark matter than visible matter, researchers say.

This discovery sheds light on how dark matter can shape the evolution of galaxies, scientists added.

Scientists analyzed 47 galaxies that fell into the Coma Cluster, one of the largest structures in the universe. Inside this cluster, thousands of galaxies are bound together by gravity in a space just 20 million light-years wide. (For comparison, the Milky Way is about 100,000 light-years wide.) [Poll: Will Dark Matter Ever Be Explained?]

Although these 47 galaxies are about as large as the Milky Way, they surprisingly contain only 1 percent as many stars as our home galaxy — a discovery made last year by astronomers in the United States, Canada and Japan using the Dragonfly Telephoto Array in New Mexico. This array of eight connected Canon telephoto lenses helped to detect extremely faint objects that conventional telescope surveys miss.

"We would not expect to find these objects survive for long in the Coma Cluster," said study lead author Cameron Yozin, a doctoral student at the International Center for Radio Astronomy Research and the University of Western Australia in Crawley. "Their unusual properties stimulated a debate as to how they fit in with our broader ideas of galaxy formation and evolution."

Now, using powerful computer simulations to model the evolution of these galaxies, the researchers suggest these galaxies must be packed with dark matter.

"These galaxies could have survived in the cluster for a long time if protected by an immense amount of dark matter, approximately 100 times as massive as the combined mass of their stars," Yozin told Space.com. For comparison, the Milky Way has about 10 times as much dark matter as visible matter, Yozin noted.

"The growth of galaxies can be stunted early on if they happen to fall into the densest regions of the universe, such as the Coma Cluster," Yozin said.

The research team's calculations found that these "failed" galaxies were not torn apart within the cluster because they had enough dark matter to protect their visible matter. "These galaxies may have originally had as much dark matter as a larger galaxy like our Milky Way has but have formed far fewer stars, giving rise to a significantly large dark-matter-to-visible-matter ratio," Yozin said.

Since these 47 galaxies were discovered, nearly 1,000 large, faint galaxies "have been detected in the Coma Cluster alone," Yozin said. "As further observations are made, we expect to find many similar objects with large dark-to-visible-matter ratios," Yozin added.

Yozin and co-author Kenji Bekki, of the International Centre for Radio Astronomy Research and the University of Western Australia, detailed their findings online July 20 in the journal Monthly Notices of the Royal Astronomical Society.