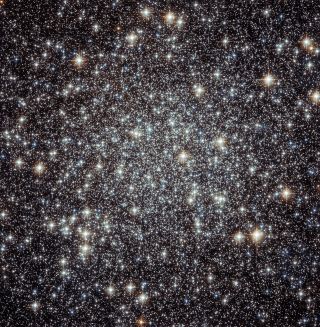 Globular clusters are densely packed collections of ancient stars. Roughly spherical in shape, they contain hundreds of thousands, and sometimes millions, of stars. Studying them helps astronomers estimate the age of the universe or figure out where the center of a galaxy lies.

There are about 150 known globular clusters in the Milky Way galaxy, according to Georgia State University's HyperPhysics website. Most are estimated to be at least 10 billion years old, and contain some of the oldest stars in the galaxy. The clusters likely formed very early, before the galaxy flattened into a spiral disc.

Some globular clusters, such as Messier 13 (M13) in the constellation Hercules, can be seen with the naked eye. They are pretty to look at, but it was only after telescopes were invented that they began to shine in astronomy circles. With telescopes, it was possible to peer closer at the stars within these clusters. They are mostly low-mass red stars and intermediate-mass yellow stars — none of them more massive than 0.8 solar masses, according to HyperPhysics. [Related: How to See the Great Hercules Cluster of Stars]

Some other general observations of globular clusters, according to Pennsylvania State University: they are found in every direction in the sky, the density of stars in a globular cluster is much greater than the density of stars around the sun, and the clusters are not found to contain any gas. The abundance of any elements heavier than helium is only 1 percent to 10 percent of the abundance of the same elements in the sun.

Globular clusters formed from giant molecular clouds, or huge masses of gas that form stars as they collapse. Because there is less free gas available now than at the beginning of the universe, globular clusters generally cannot form today.

However, there is a globular cluster forming in a galaxy near to the Milky Way called the Large Magellanic Cloud. This is because it has an unusual amount of gas, Harvey Richer, an astrophysicist at the University of British Columbia in Vancouver, Canada, told Space.com.

While you can see multiple generations of stars in globular clusters, what happens is the subsequent generations evolve from the first one. The first set of stars gobble up most of the gas, then as they die (millions of years later) they eject the gas. This means that the age difference between different star cluster generations is small, less than 1 percent of the globular cluster's age, Richer added.

The younger stars have heavier elements and more helium than their older companions, and also have different motions than the older stars. Recent research with the Hubble Space Telescope revealed that the original population is more centered in the globular cluster, while newer stars slowly diffuse outward.

Each globular cluster moves as a whole in its host galaxy, but within the cluster the stars also move individually and randomly – almost like molecules in a gas, Richer said. The individual motions of the stars act as a shield that stops them from eventually crashing into each other. However, gravity also acts as a glue to stop the star cluster from flying apart.

Globular clusters also rotate, but not as much as a galaxy such as the Milky Way. That's because the original gas cloud of which the clusters were created was also not rotating rapidly, Richer said. However, a slight rotation is apparent in the clusters because they are a little flattened, showing the motion. A typical rotation is between 5 to 10 kilometers per second (3 to 6 mph). By contrast, the Milky Way rotates at 250 km/second (155 miles/second).

The first two officially discovered and named clusters in the telescopic age were M22 (in Sagittarius, in 1665) and Omega Centauri in Centaurus, according to Encyclopedia Britannica. Like M13, Omega Centauri is also visible to the naked eye, but was not classified as a globular cluster until examined by a telescope.

M22 was a notable find not only for its early discovery, but also for the ages of the stars within it. The stars range between 12 billion and 13 billion years old, which date it close to the formation of the universe 13.8 billion years ago, according to the European Space Agency.

“[Its discovery] is not so surprising as it is one of the brightest globular clusters visible from the Northern Hemisphere, located in the constellation of Sagittarius, close to the Galactic Bulge — the dense mass of stars at the center of the Milky Way,” according to the ESA.

It's tricky to find M13 with the naked eye, but if the skies are especially dark and clear it is possible, ESA wrote. Omega Centauri and M13 both were discovered by Edmund Halley in the 18th century; Halley is best known as the astronomer who figured out that Halley's Comet returns to Earth periodically.

“As Halley wrote: 'This is but a little Patch, but it shews it self to the naked Eye, when the Sky is serene and the Moon absent,'” ESA wrote. Centuries later, M13 was also the target of the Arecibo radio telescope message to extraterrestrials in 1974.

In 1917 astronomer Harlow Shapley, studying Cepheids, a certain kind of variable star within each cluster, noted that these stars shine at a predictable brightness depending on distance from the receiver. He was able to calculate the distances to these stars, which revealed the galactic center is in the constellation Sagitarrius.

Shapley also noted that globular clusters are arranged symmetrically around the galaxy, but that they were arranged equally above and below the galactic plane, seeming to avoid the plane itself.

Shapley's model greatly increased the size of the galaxy and pushed the solar system — and humanity — farther from the center. However, Shapley believed that the universe was "a single, enormous, all-encompassing unit," according to the American Institute of Physics. Building on Shapley's research, Edwin Hubble found globular clusters that were even more distant — as much as 10 times farther — and that lay beyond the Milky Way, in other galaxies. Presented with Hubble's evidence, Shapley reportedly was glad to see his theories refuted.

The namesake Hubble Space Telescope has been particularly productive when it comes to looking at globular clusters, because they are not obscured by Earth's atmosphere. With an absence of star twinkling, the stars come into sharper view. This makes it easier to calculate their distance and properties. In one area of the Virgo constellation alone, NASA wrote in a release in 2008, the telescope revealed more than 11,000 globular clusters.

At the same time, the telescope gave hints as to why M87 (which is embedded in the same region) has more star clusters than what would be expected. This is because M87 and clusters like it were created in very dense areas of the universe that provided more favorable conditions for star birth, which takes place in clouds of gas called nebulae.

Hubble also destroyed a long-standing perception among astronomers that globular clusters always contain stars of about the same age. The most massive globular clusters likely grab on to any material that is nearby and birth new generations of stars, NASA wrote in a past release.