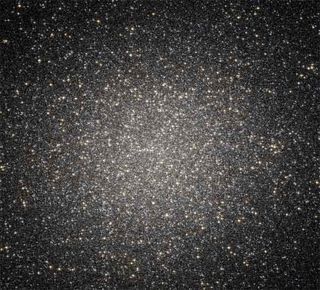 The core of the globular cluster Omega Centauri glitters with the combined light of 2 million stars. Researchers have detected a possible intermediate-mass black hole in the cluster's core.
(Image: © NASA, ESA, and the Hubble Heritage Team (STScI/AURA).)

A newdiscovery of a middleweight black hole suggests black holes come in all sizes.

Black holescan't be seen, but they're detected by noting their effects on stars or gasaround them. They're so dense that nothing, including light, escapes them. Onlytwo classes of black holes are firmly established to exist: Stellar black holestypically weigh a few times the mass of the sun; supermassive black holes areloaded with millions or billions of solar masses.

Astronomershave longdebated the existence of a class of middleweight black holes, which couldbe a missing link in the evolution of the universe's first stellar black holesto supermassive blackholes that anchor most major galaxies.

Datagathered by instruments on the Hubble Space Telescope and the Gemini Southtelescope in Chile show that the sky's largest star cluster, Omega Centauri,might harbor an elusive intermediate-mass black hole in its center.

?Thisresult shows that there is a continuous range of masses for black holes, fromsupermassive, to intermediate-mass, to small stellar mass types," said astronomerEva Noyola of the Max-Planck Institute for Extraterrestrial Physics in Germany,and leader of the team that made the discovery, which was announced today.

Located17,000 light-years away, Omega Centauri has a long history of perplexingastronomers. Nearly 2,000 years ago, scientists listed it as a single star. In1677, Edmond Halley revised Omega's identity as a nebula, and it wasn't untilthe 1830s that English astronomer John Herschel recognized it as a globularcluster.

The entirecluster contains about 10 million stars tightly bound by gravity, making OmegaCentauri among the biggest and most massive of some 200 globular clustersorbiting the Milky Way. These clusters tend to house mostly ancient stars andare thought to be remnants of the early universe.

Bymeasuring the velocities of stars in the cluster's center, Noyola and hercolleagues calculated Omega's total mass to be far higher than expected basedon the number and type of stars seen.

Theresearchers suspect the missing mass comes from a black hole weighing 40,000solar masses at the center of the cluster.?

Otherpossible explanations for the missing mass include a collection of unseenburnt-out stars, such as white dwarfs or neutron stars, or a group of starswith elongated orbits that would make the stars closest to the center appear tospeed up and result in an overestimation of mass. Noyola says thesealternatives are unlikely, partially due to the fact that both scenarios would bevery short-lived.