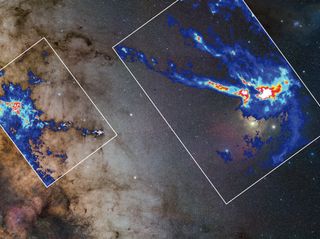 The Pipe Nebula (left) and Rho Ophiuchi molecular clouds (right) are shown in this image of the Milky Way galaxy. Each inset map shows the extent to which the light of background stars dims as it passes through the clouds. These maps form the basis of the three-dimensional reconstruction of cloud structure from which the astronomers derived a so-called 'recipe for star formation.'
(Image: © ESO/S. Guisard; Column-density maps: J. Kainulainen, MPIA)

Stars may be born much easier than previously thought, astrophysicists say.

The formation of stars determines where new planetary systems can arise as well as the structure and evolution of galaxies. Learning more about star formation could help scientists understand the remaining mysteries about the birth of galaxies, including how the supermassive black holes at their hearts apparently originated so early in the universe's history.

A dearth of data on the way matter is distributed within star-forming clouds has limited the accuracy of star formation models. Now scientists have developed a way to determine these details by using so-called dust-extinction maps, or observations of how dust scatters and absorbs light. [Top 10 Star Mysteries of All Time]

The birth of stars

Stars are born when pockets of gas and dust within interstellar molecular clouds exceed critical density and collapse under their own gravity. Once the pressure and the temperature inside get high enough for nuclear fusion to ignite, it creates a star. The rate at which stars form depends mainly on the number and density of these clumps within stellar nurseries.

Scientists have now used one feature of these clouds to better understand star formation. As the light of distant stars penetrates through a stellar nursery, the molecular cloud's dust dims the light. By measuring how this process dims thousands of different stars, scientists can reconstruct the cloud's 3D structure, helping pinpoint how matter is distributed within the cloud.

Using data from 16 nearby molecular clouds, each within about 850 light-years of Earth, "we could devise a very concrete recipe for how new stars are born in the interstellar gas clouds," study lead author Jouni Kainulainen, an astrophysicist at the Max Planck Institute for Astronomy in Heidelberg, Germany, told Space.com. "And the ingredients of this recipe are simple to understand — only those regions in the clouds in which density is higher than about 5,000 molecules per cubic centimeter produce stars, and about a tenth of the gas in these regions collapses into the new stars."

A clue for cosmic clouds

One key consequence of these findings "is that we have given astronomers a new tool to estimate the rates at which molecular clouds form stars, without even seeing the new stars in the clouds," Kainulainen said. "I quote my collaborator Thomas Henning — 'Show us your image of a cloud, and we can tell you how much it forms stars right now.'"

Such a capability "gives us a great possibility to use new, powerful telescopes such as the Atacama Large Millimeter/submillimeter Array (ALMA) to observe gas clouds in the galaxy and better map its star-formation capacity," Kainulainen said. ALMA consists of 66 high-precision microwave antennas spread over distances of up to 10 miles (16 kilometers) in the Chilean desert, which can act like a single, high-resolution telescope. The array has just commenced operations.

Intriguingly, the researchers found it was simpler for stars to form in these clouds than once predicted by theory. But the findings have yet to address the question of how galaxies and supermassive black holes formed in the early universe, Kainulainen said. "I think it is currently too early to speculate about the possible effects of our findings to the early universe," he said.

"We have to remember that physical conditions during the early galaxy formation were quite different from those of the galaxies today," Kainulainen said. "It would be an unreasonable leap in conclusions to assume that the process of star formation would proceed exactly in the same way as in the current, local universe. Our results are best applicable to spiral galaxies such as the Milky Way in the local universe."

Future studies should address the assumptions made in creating the team's 3D models for the molecular clouds, Kainulainen said. "It is a good topic for future discussions — how this 3D modeling could potentially be improved," he said. "I hope we will have comments and ideas from other scientists regarding this."

Future research could determine what processes are most responsible for shaping molecular clouds.

"We know today very well that processes such as gravitational forces and magneto-hydrodynamic turbulence have a key role in shaping the clouds," Kainulainen said. "With the parameters we have derived, we can answer questions such as, 'In which regions is the cloud structure most crucially affected by turbulence, and in which by gravity?' Such questions are of great importance in understanding the origin of interstellar gas clouds in galaxies and their evolution."