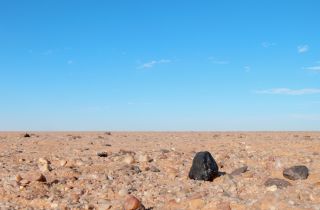 How do I spot thee, asteroid? Let me count the ways.

in a series of presentations Monday (April 29), the first day of the 6th International Academy of Astronautics Planetary Defense Conference, scientists from different Near-Earth Object (NEO) monitoring systems discussed their successes and what the future might bring.

Related: Diamonds in Meteorite May Hail from Our Ancient Solar System

Space rocks are designated with the year they are first spotted. This asteroid was spotted not only the same year it descended toward Earth, but also just 8.5 hours before it hit Earth's atmosphere.

Scout's goal is to continually monitor the objects listed on the Minor Planet Center's Near-Earth Object Confirmation Page (NEOCRP). This webpage lists unconfirmed objects, keeps tabs on details like an object's trajectory (called the ephemeris) and gathers information related to the object's hazard potential. Instead of providing a rigorous probability assessment, Farnocchia said, Scout's automated system produces impact ratings and scores to identify interesting objects to stay ahead of an object's sometimes short observation arc, or the time between an object's first observation and its most recent one.

An object gets removed from the system when the Minor Planet Center gives it an alphanumeric classification after more observations pour in. Eventually, if time passes and an object remains unclassified, it, too, is removed from NEOCRP and Scout.

In space and on the ground, there are other projects dedicated to watching for big rocks in the sky.

Next came a presentation on the Large Synoptic Survey Telescope (LSST) currently in progress. From the Cerro Pachón ridge in north-central Chile, the LSST mission plans to spend 10 years surveying the sky to achieve ''achieve astronomical catalogs thousands of times larger than have ever previously been compiled,'' according to the LSST website. Las Cumbres Observatory in California also has something in the works: presenter Tim Lister brought up a software tool kit called Target and Observation Manager (TOM), which is designed to facilitate astronomical observing projects. As of January, this software toolkit now contains a module for importing targets from the Scout NEOCP Hazard Assessment system.

Astronomer Joseph Masiero shared recent results from the NEOWISE mission, the asteroid-hunting portion of the polar bear-sized Wide-field Infrared Survey Explorer (WISE) spacecraft. NEOWISE has spotted over 190,000 small bodies in space by collecting infrared information as it orbits Earth, and the mission's most recent release of data went public on April 11, 2019.

The Arecibo Observatory in Puerto Rico offers a powerful method for scientists to narrow down how an asteroid moves in space, and what size and shape it is. Researcher Patrick Taylor said during the conference that by making radar observations, the observatory can determine properties about small bodies. For instance, Arecibo's radar revealed that there are in fact two small moons orbiting the asteroid 3122 Florence, the last object observed before Hurricane Maria struck the island in 2017, said Taylor, adding that optical instruments would not have been able to make that detection.

Hurricane Maria damaged Arecibo and the island at large, but the facility is back up and running. In addition to facility repairs, staff at the observatory worked with the local community to support their recovery process, too.