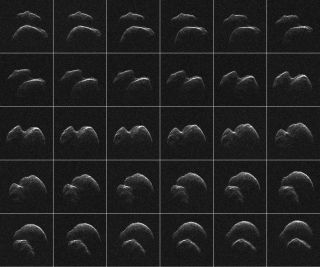 This composite of 30 images of asteroid 2014 JO25 was generated with radar data collected using NASA's Goldstone Solar System Radar in California's Mojave Desert. The asteroid flew by Earth on the morning of April 19, 2017.
(Image: © NASA/JPL-Caltech/GSSR)

An asteroid that zoomed by Earth today (April 19) at less than five times the distance between the Earth and the moon has been caught on radar.

The new images, which were taken yesterday (April 18), capture features on the near-Earth asteroid 2014 JO25 as small as 25 feet (7.5 meters) across, scientists said. The photos — which were combined to make this video of asteroid 2014 JO25 — reveal that the space rock rotates once every 5 hours and has a peanut-like structure, with the larger of the two lobes about 2,000 feet (620 m) wide.

"The asteroid has a contact binary structure — two lobes connected by a neck-like region," Shantanu Naidu, a scientist from NASA's Jet Propulsion Laboratory in Pasadena, California, who led the observations, said in a statement. "The images show flat facets, concavities and angular topography."

The images were taken with NASA's 230-foot (70 m) antenna at the Goldstone Deep Space Communications Complex in California. Additional observations will be made by Goldstone and the 1,000-foot-wide (305 m) dish at the Arecibo Observatory in Puerto Rico today through Friday (April 19 to April 21) and could provide even higher-resolution images, NASA officials said in a statement.

2014 JO25 was discovered in May 2014 by astronomers at the Catalina Sky Survey near Tucson, Arizona. Its closest approach occurred this morning at 8:24 a.m. EDT (1224 GMT), when the rock got within 1.1 million miles (1.8 million kilometers) of Earth — roughly 4.6 times the distance from our planet to the moon.

This close encounter is the nearest the asteroid has come to Earth in 400 years; it won't get this close again until the 2500s, NASA scientists have said.

Radar is commonly used to study asteroids, as it offers a way to learn more about space rocks' structure without having to send a probe out to meet them. Radar has been used to investigate hundreds of asteroids near Earth and provides information about sizes, shapes, rotation, surface features and roughness.