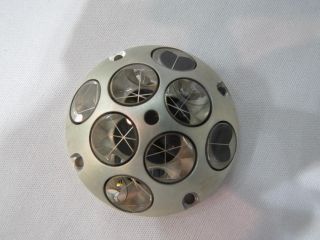 The NASA payload, known as the Lunar Retroreflector Array (LRA), is a technology demonstration composed of eight mirrors made of quartz cube corners that are set into a dome-shaped aluminum frame. These mirrors are intended to serve as markers for other spacecraft, which can use them to orient themselves for precision landings.

The entire instrument is smaller than a computer mouse and lightweight. But it's tough, radiation-hardened and designed to be long-lived, so the LRA may not have been destroyed by Beresheet's hard landing.

"Yes, we believe the laser reflector array would have survived the crash, although it may have separated from the main spacecraft body," said David Smith of the Massachusetts Institute of Technology, principal investigator of the Lunar Orbiter Laser Altimeter (LOLA) instrument aboard NASA's Lunar Reconnaissance Orbiter (LRO) spacecraft.

"Of course, we do not know the orientation of the array," Smith, who's also an emeritus researcher at NASA's Goddard Space Flight Center in Greenbelt, Maryland, told Inside Outer Space. "It could be upside down, but it has a 120-degree angle of reception, and we only need 1 of the 0.5-inch cubes for detection. But it has certainly not made it any easier."

Laser beams generated by LOLA hit the lunar surface and bounce back to the instrument. For each beam that returns, LOLA measures its time of flight, or range.

And if LOLA manages to bounce some light off the LRA reflector, the team should know about it.

NASA is interested in dotting the moon with many such retroreflectors in the future. These would serve as permanent "fiducial markers" on the moon, meaning future craft could use them as points of reference to make precision landings.

In addition, LRO is attempting to image Beresheet's crash site with its Lunar Reconnaissance Orbiter Camera system, or LROC for short, Smith said.

Preliminary data supplied by the engineering teams of the nonprofit group SpaceIL and the company Israel Aerospace Industries (IAI), which together led Beresheet's mission, suggest a technical glitch in one of the lander's components triggered the chain of events on April 11 that caused the main engine of the spacecraft to malfunction.

Without the main engine working properly, it was impossible to stop Beresheet's velocity. The moon lander overcame the issue by restarting the engine. However, by that time, its velocity was too high to slow down and the landing could not be completed as planned, mission team members said.

According to SpaceIL and IAI, information collected so far shows that the first technical issue occurred at 8.7 miles (14 kilometers) above the moon. At 492 feet (150 meters) from the lunar terrain, connection with the spacecraft was lost completely. At that time, Beresheet was moving vertically at 310 mph (500 km/h), headed for an inevitable collision with the lunar surface.

The Beresheet spacecraft, whose name means "genesis" or "in the beginning" in Hebrew, launched on February 21.

Meanwhile, Israel's moon dream has not died! SpaceIL President Morris Kahn announced over the weekend that the group plans to build and launch a follow-on lunar lander: Beresheet 2.0.

Leonard David wrote the forthcoming book "Moon Rush: The New Space Race," to be published by National Geographic in May 2019. A longtime writer for Space.com, David has been reporting on the space industry for more than five decades. Follow us on Twitter @Spacedotcom or Facebook.