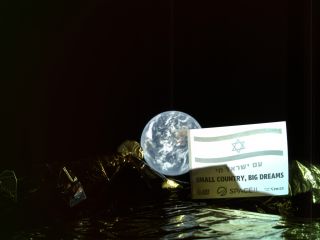 Israel's Beresheet lunar lander captured this selfie, which was released March 5, when the spacecraft was 23,363.5 miles (37,600 kilometers) from Earth. Australia is clearly visible.
(Image: © Beresheet)

The newly released photo shows the robotic lander, known as Beresheet, looking back at Earth from a distance of 23,363.5 miles (37,600 kilometers).

"In the photo of Earth, taken during a slow spin of the spacecraft, Australia is clearly visible," mission team members wrote in an image description today (March 5). "Also seen is the plaque installed on the spacecraft, with the Israeli flag and the inscriptions 'Am Yisrael Chai' and 'Small Country, Big Dreams.'"

Beresheet also snapped another selfie at about the same time. This other photo shows a tiny sliver of Earth peeking above the spacecraft's body.

Beresheet, a joint project of the nonprofit group SpaceIL and the company Israel Aerospace Industries, launched to Earth orbit atop a SpaceX Falcon 9 rocket on Feb. 21. The lander has already performed two engine burns, pushing its path closer to the moon.

Several more such maneuvers are on the docket in the near future. If all goes according to plan, Beresheet — which means "in the beginning" in Hebrew — will be captured into lunar orbit on April 4, then drop softly onto the moon's surface on April 11.

That landing would be a major achievement. To date, the only entities to pull off a soft lunar touchdown are three superpower nations: the Soviet Union, the United States and China.

SpaceIL began as a competitor in the Google Lunar X Prize, a $30 million race that asked privately funded teams to land a robot on the moon and have it perform a few basic tasks. The contest ended last year without a winner, but SpaceIL and several other former teams continued shooting for the moon.

The entire Beresheet mission, including launch, costs about $100 million, team members have said.

Beresheet's ride through space hasn't been entirely smooth. Shortly after liftoff, team members noticed that the craft's star trackers, which are critical to navigation, are susceptible to blinding by solar radiation. And Beresheet's computer performed a reset unexpectedly just before the craft's second planned engine burn.

Mission team members have overcome these issues. For example, they traced the computer reset to cosmic radiation and firmed up Beresheet's defenses with a software update. The lander was then able to execute the engine burn, which put Beresheet back on track toward the moon.