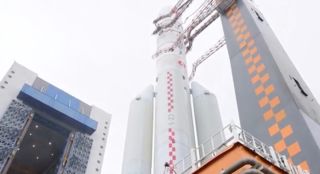 China's heavy-lift Long March 5 rocket is being readied for its comeback flight at the Wenchang Space Launch Center in south China's Hainan Province.

The carrier rocket, coded as Long March 5 Y3, is planned to be launched around the end of December, according to the China National Space Administration (CNSA). A LaunchStuff Twitter post pegs the liftoff as slated for Dec. 27.

The launch will be the third ever for the Long March 5, and the first since a July 2017 liftoff ended in failure. An investigation traced the cause of that mishap to a problem with a first-stage engine.

In a newly posted China Central Television (CCTV) video, CNSA deputy head Wu Yanhua reports that engineers and scientists are convinced that all of the prep work for the upcoming launch — whether in terms of technology or quality assurance — has been completed.

"Next, we will fill it with fuel at the launching area and run some tests," Wu told CCTV.

The Long March 5 booster is essential for China's future space station, as well as its moon and Mars exploration plans.

"If the flight is successful, it will be tasked with a series of key missions including launching China's first Mars probe, the Chang'e 5 lunar probe and a core module for the manned space station," Wu said.

A modified version of the rocket, the Long March-5B, will be used to construct China's space station.

You can see the booster being readied for the upcoming flight in this LaunchStuff video.