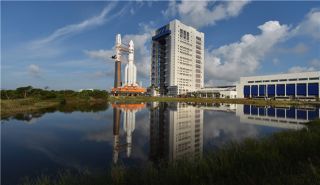 China's Long March 5 heavy-lift rocket is seen here rolling out to its launchpad at the Wenchang launch center on Hainan Island ahead of its successful Nov. 3, 2016 launch debut. The rocket’s second launch, on July 2, 2017, failed, according to Chinese space officials.
(Image: © China Aerospace Science and Technology Corporation)

WASHINGTON — The second launch of China’s most powerful rocket, the Long March 5, ended in failure July 2, the second incident involving a Chinese launch vehicle in as many weeks.

The Long March 5 lifted off from the Wenchang Satellite Launch Center on the island of Hainan at 7:23 a.m. EDT (1123 GMT). The launch, broadcast live by Chinese media, appeared to go as planned, but those broadcasts ended prior to any announcement of separation of the rocket’s payload, the Shijian-18 communications satellite.

China’s state-run Xinhua news service announced about 45 minutes after liftoff that the launch had failed. Xinhua only said that an "anomaly" occurred during the launch, and that an investigation would take place. [Latest News About China's Space Program]

Chinese broadcaster CGTN reported that the Long March 5 "started to malfunction shortly after takeoff." Observers watching in-flight video of the launch noticed a plume of gas late in the first-stage burn, suggesting a problem with one or both of the engines in the core stage.

The launch was the second for the Long March 5, China’s most powerful rocket, able to place 55,000 lbs. (25,000 kilograms) into low Earth orbit and 31,000 lbs. (14,000 kg) into geostationary transfer orbit. The rocket’s first launch, in November 2016, was declared a success although issues with the rocket placed the payload, the Shijian-17 satellite, into not quite the planned orbit. An upper stage attached to the satellite was later able to correct the orbit.

The failure was the second incident involving a Chinese launch in as many weeks. A Long March 3B rocket launched the Chinasat-9A satellite into geostationary transfer orbit June 19. However, a malfunction in the rocket’s upper stage stranded the satellite in a much lower orbit than planned. The spacecraft is expected to be able to raise itself into geostationary orbit using its own thrusters, but with a significantly shorter orbital lifetime as a result.

The Long March 5 is a key part of China’s human spaceflight and planetary exploration plans. The next Long March 5 launch was scheduled for November, carrying the Chang’e-5 spacecraft. That spacecraft would be China’s second lunar lander mission and the first lunar sample return mission by any nation in more than four decades.

The Long March 5 will also be used to help assemble China’s first permanently crewed space station. The core module of the station will be launched on a Long March 5 in 2018 or 2019.