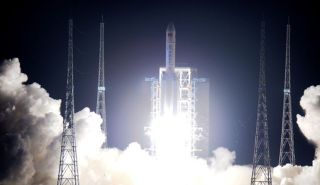 China's space program recently staged a show test of its first Mars lander on a nearly 460 feet (140-meter) tower at a site near Beijing, looking ahead to the program's launch next summer. But an equally crucial mission component faces a different kind of test in December.

That's when the country's largest rocket will resume to flight, blasting off from the Wenchang Satellite Launch Center on Hainan island in southern China. The Long March 5, with a length of 184 feet (56 meters) and a mass at liftoff of nearly 2 million lbs. (867,000 kilograms), is one of the biggest active rockets in the world, comparable to the European Ariane 5 or the American Delta IV Heavy, earning it the nickname "fat five" in Chinese.

With this rocket, China intends to launch Chang'e 5, which is a lunar sample-return mission, and its first independent interplanetary mission, bound for Mars, next year. A shorter variant, the Long March 5B, will be used to launch the modules of China's planned space station into low Earth orbit.

Related: This Is the 1st Photo of China's Mars Explorer Launching in 2020

However, all of these projects will face delays again if the Long March 5 does not have a successful return to flight next month.

The Long March 5 made a shaky debut in late 2016; its second launch, in July 2017, failed to reach orbit after equipment on a first-stage engine broke off. The anomaly postponed the launch of Chang'e 5, which had been scheduled for November 2017.

Now, after redesigns and testing of its first-stage liquid-hydrogen-liquid-oxygen engines, the Long March 5 is once again ready for flight. The rocket's first mission, expected to lift off in mid- to late December, will carry Shijian 20, a large experimental communications satellite.

China lost Shijian 18, a similar satellite based on the same new large-satellite platform, during the failed 2017 launch and, most likely, another communications satellite, called ChinaSat 18, in August.

Despite the importance of the payload in that context, China's main concern during next month's launch will be getting the rocket cleared for more ambitious projects. Launch preparations for the Long March 5 family, including the rocket assembly and testing, take about two months, forcing China to spread out missions.

If the Long March 5 performs well, the next launch will be a test of the Long March 5B that would carry an uncrewed prototype of a new crewed spacecraft designed to take astronauts beyond low Earth orbit. Success of that flight would allow China to begin preparing to launch the 44,000-lb. (20,000 kg) core module of the Chinese Space Station.

The next mission to fly would likely launch the 17,600-lb. (8,000 kg) Chang'e 5 lunar spacecraft in late 2020 on the fifth Long March 5. That mission aims to collect 4.4 lbs. (2 kg) of lunar samples and return them to Earth following a complex automated lunar orbit rendezvous between an ascent vehicle and a service module.

If these launches go well, China may begin the construction of its space station in 2021. The complex will eventually consist of the Tianhe core module and two modules holding experiments. China also plans to launch a Hubble-class space telescope into the same orbit, which would be capable of docking with the space station for maintenance and repairs.

All of these plans are dependent on the Long March 5 and its 5B variant. Preparations for the crucial return-to-flight mission are now underway.

With a core stage that measures 16.4 feet (5 m) across, the rocket is too wide to be transported by rail as China's earlier rockets were. Instead, specially designed cargo ships dubbed Yuanwang 21 and Yuanwang 22 collected the components of the new Long March 5 from Tianjin, China. The containers holding the rocket stages and side boosters arrived at Wenchang Satellite Launch Center in late October.

Unlike China's three closed-off inland launch centers, Wenchang is more open to the public and boasts viewing areas at safe distances. China has not yet announced whether there will be a live (or nearly so) webcast of the mission, as was made available for the two previous Long March 5 launches, given the last failure and the many hopes that rest on this launch. Nor has the country announced the exact timing of the upcoming launch.

Of course, the fate of the Long March 5 rocket family wasn't the only uncertainty on people's minds at the public test of the Mars lander in Hebei Province on Nov. 14. "After the launch, it will take around seven months for the Mars probe to reach its destination, but the landing process only lasts seven minutes," said Zhang Rongqiao, chief designer of China's Mars exploration mission, said at the test. "So the landing is the most difficult and challenging part of the Mars mission."