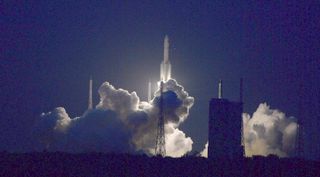 A Long March 5 rocket lifts off from the Wenchang Satellite Launch Center July 2. The launch was later declared a failure.
(Image: © Xinhua)

HELSINKI — China's major space missions including a lunar sample return, Mars orbiter and rover and a modular space station could be facing delays due to an apparent issue affecting rockets required for launches.

The Long March 5 heavy-lift rocket is China's most powerful launch vehicle and was designed to launch large spacecraft to geosynchronous orbits and planetary bodies. It was being prepared for a third flight in July, Yang Baohua, vice president of the China Aerospace Science and Technology Corporation (CASC), China's main space contractor and developer of the Long March 5, announced in a Jan. 29 news conference in Beijing.

The mission would come two years after the failure of the second launch. However that schedule appears to have slipped as the launch vehicle has yet to be delivered to the launch site, with knock-on effects possible for China's major space plans.

The fourth Long March 5 was expected send the Chang'e-5 lunar sample return mission into trans-lunar injection at the end of 2019. The fifth launch was slated to launch the country's first independent mission to Mars during a once-every-26-month launch window in late July to early August 2020.

In between, a test launch necessary for the construction of the future Chinese Space Station was due to take place.

The last reports on the Long March 5 from Chinese media appeared in April, showing components of the rocket apparently ready for transport, in time for the scheduled launch.

Components of the Long March 5 are manufactured in the northern port city of Tianjin, and are collected by two specially designed cargo ships, Yuanwang-21 and Yuanwang-22, then delivered to the Wenchang Satellite Launch Center on the southern island of Hainan.

That process takes around two-and-a-half weeks, after which launch preparations at the launch complex for the first two Long March 5 rockets took two months.

However the transportation of components has not taken place and, according to open source ship tracking, both ships have remained moored at Jiangyin since early April since the completion of refurbishment. This is backed up by the latest available imagery from the European Space Agency's Sentinel 2B Earth observation satellite showing the two 100-meter-long ships moored on June 3.

There has been no official or media update on the status of the planned July mission. This correspondent has been informed by figures close to the Chinese aerospace industry that online discussion of the matter has been discouraged and could deleted by China's internet censorship apparatus.

The Long March 5 was not among other Long March series launch vehicle models showcased at the ongoing Paris Airshow by the China Great Wall Industry Corp., a CASC subsidiary.

Should activities indicating preparations for launch begin immediately, the Long March 5 would be ready for flight no earlier than September. The longer the rocket is grounded, the greater the pressure on a busy launch schedule.

While the Chang'e-5 mission will have regular opportunities for flight, if the 2020 Mars launch window is missed there will not be another opportunity to launch until late 2022, due to the respective orbits of Earth and Mars.

The Long March 5 had a successful first flight in late 2016 but suffered a failure in early July 2017. An investigation identified the problem to be a fault with the turbopump on the YF-77 cryogenic engines which power the rocket's first stage.

Following successful ground test firing of redesigned YF-77 engines in February 2018, a return-to-flight of the Long March 5 was slated for later that year. When this slipped, the new July target was issued in early 2019.

When it does launch, the third Long March 5 will carry the Shijian-20 ("Practice-20") communications satellite, based on a new, large DFH-5 satellite platform which supports satellites from 6,500 to 9,000 kilograms.

A variant of this rocket, the Long March 5B, is also being developed to facilitate the launch of 20-metric-ton space station modules to low Earth orbit. As it uses the same engines and similar cores, its test flight is dependent on a successful return-to-flight of the Long March 5.

The Long March 5B test flight was planned for the first half of next year, carrying an uncrewed next-generation spacecraft, opening the possibility for the launch of the core module of the Chinese Space Station later in 2020.

A joint June 12 announcement by the United Nations Office for Outer Space Affairs (UNOOSA) and the China Manned Space Agency (CMSA) revealed that nine international experiments had been selected for a place aboard the CSS, maintaining that the target for completion of the three-module complex remains to be ‘around 2022'.

The 'Tianhe' core module was expected to launch in 2018, before the failure of the second Long March 5 in 2017 delayed the Long March 5B test launch and the Chang'e-5 Moon mission, which had been scheduled for December 2017.