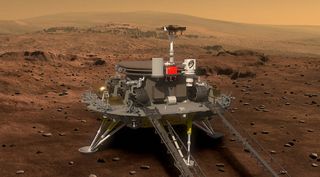 Render of China's Mars 2020 rover ahead of deployment.
(Image: © Xinhua/CNSA)

HELSINKI — China remains on schedule to ready its first independent mission to Mars in time for a short launch window in mid-2020, according to a leading space official.

Ambitiously, the mission consists of both an orbiter and a rover, with a total of 13 science payloads. The NSSC will be involved in integration of the instruments with the spacecraft.

Related: China On the Moon! A History of Chinese Lunar Missions in Pictures

The orbiter will be equipped with a high-resolution camera comparable to HiRise on board NASA's Mars Reconnaissance Orbiter, a medium-resolution camera, subsurface radar, minearology spectrometer, neutral and energetic particle analyzers and a magnetometer.

Meanwhile, the Academy of Aerospace Propulsion Technology, an institute under main space contractor the China Aerospace Science and Technology Corporation (CASC), this month completed testing of a variable thrust engine, capable of 7,500 Newtons of thrust, which will provide the majority of deceleration for the landing.

Two preliminary landing areas have been selected. The first is Chryse Planitia, close to the landing sites of NASA's Viking 1 and Pathfinder, with the second covering Isidis Planitia and stretches to the western edge of the Elysium Mons region, between the landing sites of Curiosity and Viking 2.

Site selection has been driven by a range of factors including flight system engineering constraints and the challenges of entry, descent and landing (EDL) on the Red Planet, and the science goals of the mission.

China has landed two spacecraft, Chang'e-3 and Chang'e-4, on the moon, but the challenges for Mars are greater and more varied. The presence of a thin atmosphere poses dangers to the spacecraft through aerothermal heating but does not provide great assistance for slowing or descending via parachute, while the remoteness of Mars means EDL process will be automated.

The spacecraft will employ blunt body aerodynamics, a supersonic parachute and powered descent for its landing attempt. Only NASA has succeeded in successfully landing and operating spacecraft on Mars, while Russia and European Space Agency have failed will multiple attempts.

A Long March 5, China's most powerful launch vehicle, is required to launch the mission, though the heavy-lift rocket has not flown since a failure in 2017. A return to flight scheduled for mid-July appears to have slipped, as the rocket components have yet to be slipped to the Wenchang Satellite Launch Center.

A successful launch of the Long March 5 will be required for China to be ready for the Mars Hohmann transfer window in 2020, and missing this low-energy launch period would bring a wait of 26 months until the next mission launch opportunity.

Also launching missions to Mars during the launch window in July-August 2020 will be NASA, sending a 1,050-kilogram rover to Jezero crater, the ESA-Russia ExoMars 2020 lander and rover, and an orbiter from the United Arab Emirates.

India became the first Asian country to succeed with a mission to the Red Planet with the Mars Orbiter Mission spacecraft which entered orbit in 2014. China's own first attempt, the Yinghuo-1 spacecraft which piggybacked on the Russian Phobos-Grunt sample return mission, was lost when its Zenit-2SB rocket failed to leave Earth orbit.

China's Chang'e-4 spacecraft on the far side of the moon began a sixth lunar day of activities earlier this week, with the Yutu-2 rover awakening at 2:16 p.m. Eastern May 27, and the lander following at 6 a.m. May 28.

The Lunar Exploration and Space Program Center of the China National Space Administration made the announcement May 28, stating that all eight science payloads would continue operation.

Despite a decrease in drive distances across lunar days, Wang Chi states that Yutu-2, "keeps roving and making observations as scheduled."

A Chinese language space popularization blog stated following the end of lunar day five that sunlight reflected from the rover body onto the surface was causing issues with the obstacle detection systems, preventing roving.

Early results from the Visible and Near Infrared Spectrometer aboard Yutu-2 reported in Nature this month suggest the in-situ detection of materials originating from the lunar mantle in the regolith of Von Kármán crater.