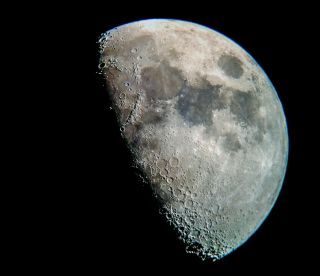 China plans to build a scientific research station on the moon in "about 10 years," according to the state news agency Xinhua.

The China National Space Administration (CSNA) intends to build the research station in the region of the moon's south pole, Zhang Kejian, head of CSNA, said in a public statement, Xinhua reported. That's a bit of a departure from the six successful NASA Apollo moon landings, which took place closer to the moon's equator between 1969 and 1972.

Details of China's long-term lunar plans are still sketchy, but CSNA has made significant steps toward lunar exploration. Earlier this year, the Chinese successfully landed the uncrewed Chang'e-4 on the far side of the moon, and have also placed astronauts aboard two temporary space stations, Tiangong-1 and Tiangong-2. Their space agency also plans to put a larger, more permanent station into orbit in the coming years.

Related: Photos from the Moon's Far Side from China's Chang'e 4

The first parts of that permanent station will reach orbit aboard the country's new Long March 5B rocket in the first half of 2020, Agence France-Presse (AFP) reported; the mission will not be associated with the International Space Station. The ISS is reaching the end of its operational lifetime, plus the United States and China do not cooperate on spaceflight endeavors.

Kejian also announced that Chang'e-5, an uncrewed lunar lander originally scheduled for launch in 2017, will attempt to reach the moon and return with samples in 2019, Xinhua reported.

China currently spends more on spaceflight than any country except the U.S., according to AFP. At the moment, the U.S. is unable to put humans in space without hitching a ride on a Russian rocket; plans to change that model by using for-profit rockets – such as those owned by SpaceX – have hit some snags. Still, American officials have also suggested that there are plans to return to the moon and stay on the world for an extended period in the near future.

Editor’s note: This article was updated to fix a typo that referred to our moon as a planet, which it is not.