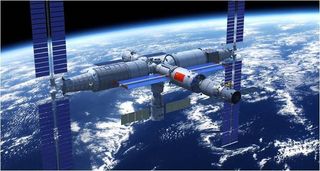 The United Nations Office for Outer Space Affairs (UNOOSA) and the China Manned Space Agency (CMSA) announced Wednesday (June 12) the winners of their joint opportunity to conduct experiments on board the China Space Station (CSS), which is scheduled to be built in the next few years.

Six winning projects were selected, and three were conditionally selected. They were carefully evaluated by a team of around 60 experts from UNOOSA, CMSA and the international space community.

The selected winners will have the chance to physically access space by flying their experiment on the CSS, developing their capabilities in space science and technology.

CMSA Director-General Chun Hao said in a statement: "CMSA stands ready to help the winning teams prepare and implement their experiments on board of the Station. CMSA is working closely with UNOOSA to further our existing cooperation and create more opportunities to enhance access to space: for example, we are thinking of releasing the next call for experiments in the near future."

The following six proposals have been accepted:

This astronomy project will be implemented by four institutions from four countries: The University of Geneva from Switzerland, the National Centre for Nuclear Research of Poland, the Max Planck Institute for Extraterrestrial Physics of Germany and the Institute of High Energy Physics of the Chinese Academy of Sciences.

This is an experiment in microgravity fluid physics and combustion. It will be implemented by the Indian Institute of Technology (BHU) and the Université Libre de Bruxelles (ULB) in Belgium.

This is an experiment in microgravity fluid physics and combustion. It will be jointly implemented by two institutions from two countries, which are: Tsinghua University from China and the University of Tokyo from Japan.

This life sciences and biotechnology project will be conducted by four institutions from four countries, namely the Norwegian University of Science and Technology, the International Space University, Vrije University Amsterdam in the Netherlands and the Belgium Nuclear Research Centre.

This experiment will be jointly implemented by the Mars Society's Peru Chapter and Spain Chapter.

The following three proposals are conditionally accepted, which means that the applicants will be given the opportunity to update their proposals to fully comply with detailed specifications of the CSS. They are:

This Earth science project will be jointly implemented by two organizations from Mexico, the National Institute of Astrophysics, Optics and Electronics (INAOE) and Benemérita Universidad Autónoma de Puebla (BUAP).

This is a project in space-utilization technology. It will be jointly implemented by two institutions from Saudi Arabia: the National Centre for Nanotechnology and Advanced Materials and the King Abdulaziz City for Science and Technology (KACST).

This is an experiment in microgravity fluid physics and combustion. It will be implemented by Sapienza University of Rome in Italy and Machakos University in Kenya.

Leonard David wrote the book "Moon Rush: The New Space Race," which was published by National Geographic in May 2019. A longtime writer for Space.com, David has been reporting on the space industry for more than five decades. Follow us on Twitter @Spacedotcom or Facebook.