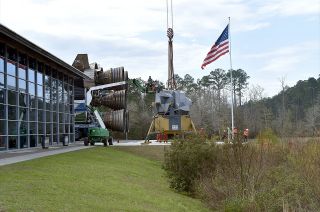 An Apollo lunar module has taken a small step towards a giant display in Mississippi.

The Infinity Science Center on Tuesday (Feb. 26) served as the landing site for the 50-year-old moon lander mockup, which was lowered and positioned by crane onto a cement apron outside of the Pearlington non-profit educational attraction.

"The Eagle has landed! This afternoon, Infinity welcomed a new addition to our suite of Apollo exhibits," the science center posted to its Facebook page, sharing photos of the delivery.

Related: NASA Centers to Visit for an Out of This World Vacation

For an artifact associated with a quarter-of-a-million-mile journey into space, Tuesday's move was considerably shorter. The lunar module had previously been on display at the nearby Mississippi Welcome Center located adjacent to the Infinity Science Center at Exit 2 on Interstate 10. The four-legged, 20-foot-tall (6-meter) lander had been mounted atop pillars 10 feet (3 meters) off the ground.

"During the 1960s, this vehicle was used as a trainer by the Apollo astronauts for their moon missions," read an informational plaque placed near the former display at the welcome center.

A low-fidelity mockup constructed from military-grade aluminum, the lunar module had been used to work out how spacesuited astronauts would exit and enter the vehicle to descend to or ascend from the moon's surface.

After its training use was over, the module was put on public display at what would become NASA's Kennedy Space Center Visitor Complex in Florida, where it stood in a rocket garden alongside boosters, engines and a mock Mercury capsule. The lunar lander was displayed without its front-leg-mounted ladder, but at times during its exhibit, a set of steps were positioned next to it to allow the public closer views.

In 1997, after undergoing a restoration, the lunar module mockup traded places with the Structural Test Article (STA) for the space shuttle's external tank, with the earlier moving to the welcome center in Mississippi and the latter leaving NASA's Stennis Space Center for Kennedy in Florida. The Infinity Science Center is today the official visitor center for Stennis.

Now at the Infinity, the lunar module has been positioned next to the first stage of a Saturn V rocket that had been allocated to launch the Apollo 19 mission and which arrived at the science center in 2016. The museum also displays the Apollo 4 command module, which flew atop the maiden Saturn V moon booster in 1967.

The Infinity Science Center plans to protect and display the Saturn V first stage by erecting a glass and steel building, which would also exhibit the command module and the newly-arrived lunar module.

"We look forward to further interpreting this unique piece of American space history for our guests!" the science center's staff wrote on Facebook.