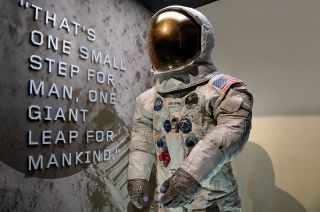 Neil Armstrong's Apollo 11 spacesuit is now back on display at the National Air and Space Museum in Washington, D.C., after 13 years being off exhibit to be preserved and conserved.
(Image: © Smithsonian)

WASHINGTON — Neil Armstrong's Apollo 11 spacesuit has returned to display, 13 years after the Smithsonian removed it from exhibit and 50 years to the day — and nearly the very minute — after it lifted off on the historic first moon landing mission.

The Smithsonian's National Air and Space Museum in Washington, D.C., revealed the Apollo 11 astronaut's A7L pressure garment, helmet assembly and gloves at 9 a.m. EDT (1300 GMT) Tuesday (July 16), just 32 minutes shy of the 50th anniversary of its Saturn V rocket launch. U.S. Vice President Mike Pence, NASA Administrator Jim Bridenstine and Ellen Stofan, director of the National Air and Space Museum, presided over a ceremony that led up to them being joined by Rick Armstrong, Neil Armstrong's son, for the unveiling of the spacesuit's exhibit.

"It is a honor to be here at the National Air and Space Museum to help unveil one of the most important artifacts of what President Kennedy called, correctly, 'the most hazardous and dangerous and bravest adventure upon which mankind has ever embarked,' Pence said. "On this day 50 years ago, Apollo 11 launched from Pad 39A at Kennedy Space Center to begin its historic 4-million-mile journey to the moon. Just three days later, commander Neil Armstrong would wear the spacesuit that we will unveil in just a few moments when he took that 'one giant leap' for mankind."

The spacesuit is now available for the public to see as part of a temporary display near the 1903 Wright Flyer, the first aircraft to achieve powered flight, on the second floor of the museum on the National Mall. Its future home, the permanent "Destination Moon" gallery, is slated to be complete in 2022.

"Neil Armstrong's spacesuit, the suit that allowed a human to walk on the surface of the moon for the first time, is one of the most iconic artifacts in our collection because of the historical feat Armstrong achieved," Stofan said.

NASA transferred Armstrong's spacesuit to the Smithsonian in 1971 following its visit to all 50 states as part of a tour that also featured the Apollo 11 command module, Columbia. Five years later, it debuted on exhibit in the National Air and Space Museum's now-former Apollo to the Moon gallery for 30 years. It was taken off display in 2006, initially only to inspect its condition in anticipation of the then-upcoming 50th anniversary of its mission.

"Once we took it off display and started examining it a little bit more closely, we decided that the mannequin it was on was not supportive," said conservator Lisa Young in an interview with collectSPACE. The decision was then made to take it off display "to start looking into a better mannequin system, collect imagery and do some research with it that had not been possible before."

The subsequent conservation effort included the creation of a detailed map of the suit through the use of X-ray imaging, CT scanning and UV photography, as well as years of investigation. Young and her fellow conservators worked to stabilize the spacesuit's degradation while taking care not to remove the remaining traces of its time on the moon.

As part of his 8-day, 3-hour and 18-minute historic 1969 journey from Earth to the moon and back, Armstrong wore his spacesuit for 2 hours and 31 minutes while making "small steps" and "giant leaps" on the lunar surface. Fifty years later, the garment is still stained with the lunar dust.

"It's challenging from a conservation perspective because you want to make sure that it never comes off, of course, or people may not believe it went to the moon," said Young with a laugh.

In the course of studying the suit, Young and her colleagues determined that the lunar dust was now deeply embedded in its outer fabric. They also found moon dust under a coating that had been applied in repairs to the suit, which led them to believe the repairs were made post-flight.

As it turned out though, the lunar material had worked its way under the coating in the course of Armstrong's moonwalk.

"The astronauts trained in their spacesuits," said Young, commenting on why the repairs were needed. "We have come to the conclusion that they didn't want to go up in a suit that they weren't familiar with, so they wore the suit that they were going to wear on the moon. They did their exercises and fittings and everything."

"They were changing out things on the suit up to two weeks prior to launch and all of those repairs that we thought may have been made post-flight, all date to pre-flight," she said.

Related: From Apollo to Mars: The Evolution of Spacesuits

For the next 50 years

The spacesuit's conservation and display were made possible by more than 9,000 supporters from around the world who took part in a Kickstarter campaign in 2015. It was the Smithsonian's first experience with crowdfunding and the museum hit its $500,000 goal within just five days.

"Just as it took thousands of men and women to accomplish this mission 50 years ago, we're so proud that thousands of people played a part in getting the suit back on display for the anniversary," said Stofan.

Just as important as studying the spacesuit was the effort that went into ensuring a new stable environment for its exhibit.

A state-of-the-art display case was designed to that it replicates the conditions of climate-controlled storage facility by tightly controlling temperature, lighting, relative humidity and ventilation. A new mannequin was also fabricated specifically for this suit, using the late Armstrong's measurements, permitting air to circulate from the case through the mannequin and into the spacesuit. This system allows unwanted vapors, caused by the breakdown of the rubber in the suit, to be pulled away from the suit over time, slowing down degradation.

Cathleen Lewis, who curates the museum's spacesuit collection, said she hopes that the conservation and the precautions taken in its new display will extend the suit's life for another 50 years, if not longer, for the benefit of those who were there 50 years ago and for those who were not.

"Much of our audience coming to the museum now has no personal experience with the Apollo program. In all likelihood, their parents don't even have a personal experience of the Apollo program," Lewis told collectSPACE. "I want to hear the full range of comments, from people who are generations separated from the Apollo 11 moon landing to those who remember it visibly. I'm really quite excited to hear what they think and how close it comes to their expectations."

To further extend public access to Armstrong's spacesuit and to take advantage of the scans completed during the conservation, the Smithsonian has also released a new 3-D digital model, allowing anyone a connection to the internet to peek inside and take a guided tour of its many components. The Digitization Program Office has also made the data available so the high-resolution model can be downloaded for use in augmented reality (AR) and virtual reality (VR) platforms, as well as for 3-D printing.

Editor's note: This story has been updated to include comments from Vice President Mike Pence on Neil Armstrong's historic spacesuit.