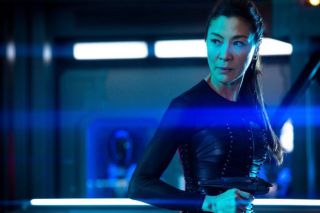 "Star Trek: Discovery's" Philippa Georgiou (played by actor Michelle Yeoh) is getting her own TV spin-off. According to Deadline, Yeoh will reportedly continue on Discovery while this new show is developed simultaneously. The new show is being developed by Yeon Kim and Erika Lippoldt.

According to the announcement from the Discovery Twitter, the new series centers on Georgiou as a part of Section 31 division.

"I'm so excited to continue telling these rich 'Star Trek' stories," said Yeoh. "Being a part of this Universe and this character specifically has been such a joy for me to play. I can't wait to see where it all goes – certainly I believe it will go 'where no WOMAN has ever gone before!'" [The Best 'Star Trek' Captains of All Time!]

Yeoh's original character died early on in Discovery, but the actor returned as a Mirrorverse version of Georgiou who was that alternate reality's Emperor of the Terran Empire. This alt-reality Georgiou eventually ceded power and started a new life as a cabaret owner, and was later recruited by Section 31. Section 31 is a clandestine security organization working for the United Federation of Planets. The organization was first introduced in Star Trek: Deep Space Nine.

"Michelle has shattered ceilings, broken boundaries, and astonished us with her grace and gravitas for decades," said Star Trek: Discovery executive producer Alex Kurtzman. "As a human, I adore her. As an actor, I revere her. Erika and Boey are remarkable, exciting writers who bring a fresh perspective to the world of Star Trek, and we're all thrilled to explore the next wild chapter in the life of Captain Philippa Georgiou."

This would be the third live-action "Star Trek" show in development, joining Discovery and the Picard series.

No title or release date for the Yeoh-led "Star Trek" spin-off has been announced.