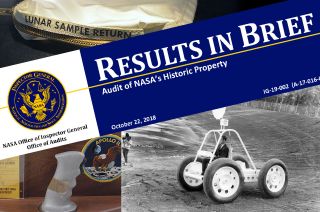 The NASA Office of Inspector General (OIG) examined NASA's management of its historic property, including the processes used to identify, account for and maintain real and personal property; the extent to which historic property is used to further NASA's current missions; and the challenges in managing historic property and aging facilities.
(Image: © NASA OIG/collectSPACE.com)

After 60 years of space exploration, NASA could do a better job of tracking its history, federal investigators have found.

The NASA Office of Inspector General (OIG), the independent investigation arm of the space agency, recently completed an audit of NASA's historic property and, in the wake of several high profile losses, has recommended that the agency adopt a more effective approach to identifying and managing its space artifacts.

"NASA's processes for loaning and disposing of historic personal property have improved over the past six decades, but a significant amount of historic personal property has been lost, misplaced or taken by former employees and contractors due to the agency's lack of adequate procedures," the OIG reported.[Should We Open Some Sealed Apollo Moon Samples?]

Further, said investigators, the OIG's efforts to recover artifacts that have escaped NASA's control have been "thwarted" by the space agency's "poor record keeping and a lack of established processes."

The OIG conducted its review of NASA's historic holdings as an extension to an eight-year assessment of the agency's aging infrastructure and facilities. The audit came on the heels of several investigations about space artifacts for which NASA had a vested interest in recovering but were instead relinquished as a result of the agency's reluctance or inability to quickly assert ownership.

In one such case dating back to 2015, a U.S. Air Force historian saw what he believed to be a prototype lunar rover in a residential backyard in Alabama. After reporting the find to NASA, the case was referred to the OIG, which learned that the rover's owner was amenable to returning the moon buggy to NASA.

"The OIG requested NASA assert ownership of the rover and, if appropriate, make plans to accept it as a donation," the audit reports. "However, after waiting more than four months for a decision from the agency, the individual sold the rover to a scrap metal company."

The vehicle's new owner rejected NASA's eventual offer to buy the four-wheeled buggy and instead had it auctioned for an undisclosed sum.

In another example cited by the OIG, NASA's failure to actively keep tabs on its loaned artifacts resulted in a lunar sample return bag from the first moon landing being ruled private property by a federal judge and eventually sold for the most ever paid for a space artifact at a public auction. The pouch had been on loan to a museum, but an inventory error led to its forfeiture and subsequent sale as part of a theft case overseen by the U.S. Marshals Office.

"In the past, the OIG has spent years working on such cases only for NASA to ultimately retract its interest in the return of the property or for the court to decide the existing owner had rightful possession of the property," the audit reported.

In addition to other concerns, the OIG found that NASA's past actions of giving away or disposing of artifacts added confusion to efforts seeking to recover federal property.

During the early Mercury, Gemini and Apollo programs of the 1960s, for example, astronauts were allowed to keep flown spacecraft parts as souvenirs without a documented procedure for the release of the items. Decades later, when those same astronauts began selling off their collections, the lack of any paperwork led to a confrontation between the OIG and the NASA veterans. To resolve the issue, Congress had to pass legislation affirming the astronauts' title to their mementos.

But even that 2012 law left open questions. An employee who was tasked with preparing artifacts for presentation to the astronauts was told by his supervisor to discard of a set of spacecraft hand controllers at the end of the Apollo program, including one used to fly the Apollo 11 crew to the moon. The employee instead took the artifacts home, and years later attempted to sell them at auction.

"When NASA learned of the sale, it sought return of the controllers," the OIG said. "[But] after three years, NASA discontinued its pursuit of the items."

The OIG report acknowledged that NASA has made improvements to its policies — for example, in the way that it managed the disposition of artifacts at the end of the space shuttle program in 2011 — but recommended the agency develop more comprehensive procedures for maintaining its heritage assets, including deciding whether it is the "most effective owner" and what property the space agency keeps because of its historical value.